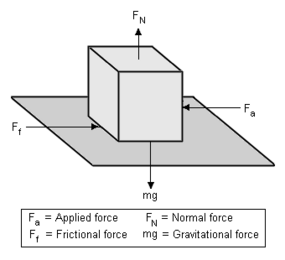 (PD) Milton Beychok: Diagram
Frictional and other forces acting on a body at rest.

Friction is the force that resists the relative lateral (tangential) motion of solid surfaces, fluid layers, or other materials in contact.

There are various categories of friction, for example:

Some important, and somewhat counter-intuitive, facts about sliding friction:

Thus, static friction opposes the tendency of two surfaces at relative rest to accelerate against each other, but cannot exceed a certain amount that depends on the nature of the surfaces, and how hard they are pressed against each other.

Similarly, it is static friction that allows us to carry a stack of books simply by moving the lowest book in the stack.

Two bodies being in contact is not sufficient for static friction to act between them. It is necessary that the bodies are pressed against each other. For instance, if two blocks are lying side by side on a table, with their surfaces meeting vertically, then there is no static friction between them, so we can move one block without moving the other. On the other hand, if one block is placed on top of the other, there is a normal force between them to balance the gravitational force, and this makes static friction possible.

This is also why the stronger we grip things, the easier it is to prevent them slipping. By increasing the grip on an object, we increase the normal force between our fingers and the objects, which raises the limiting value of the force of static friction.

, is a dimensionless constant dependent on both the surfaces in contact.

usually takes values of around

, but it is in principle possible for

to be greater than 1.

This also explains the intuitive idea that it is easier to grip a rough surface, than to hold to a slippery surface.

For instance, if a block is sliding uphill on an incline, then the net external applied force (which comes from gravitational force) as well as the kinetic friction force are in the same direction.

Magnitude of kinetic friction is independent of velocity

This is somewhat counter-intuitive, and in fact does not hold for very large velocities. However, it is a reasonable approximation for low velocities. It is also highly unlike viscous force and air resistance, which have a strong dependence on velocity.

Motion on an incline

with the horizontal. Suppose

are the coefficients of static and kinetic friction between the surfaces of the block and the inclined plane. An application of the laws of motion and the above outlined laws on static friction yield:

is sometimes termed the angle of repose for the pair of surfaces.