Fractional-reserve banking is the modern practice of lending multiples of deposits held by banks. Current banking laws (in most countries) require that only a fraction of all deposits be kept as a reserve, and the bank is free to lend out the remainder. For example, if the reserve fraction is 10%, a deposit of ten pounds enables the bank to lend ninety pounds to a new borrower (i.e. £100, less £10 kept as reserve), thereby increasing the amount of money in circulation [1]. The reserve ratio can be changed from time to time as determined by a country's banking regulatory structure, and is theoretically one means of controlling the money supply, though it is not often used as such.

Some critics of fractional-reserve banking argue that banks have an unfair advantage over other businesses in being able to "transform a dollar of reserves into many dollars of money". Others (the Austrian school, for example) mainly stress its tendency to contribute to inflation.

In the United States, banks are required to maintain reserves in the form of deposits with the Federal Reserve Bank. The reserve requirements vary depending on the type of deposit, from 3% to 10%.[1]

In the United States, reserve requirements were first established at the national level in 1863 with the passage of the National Bank Act. This act provided banks an opportunity to organize under a national charter and created a network of institutions whose notes could circulate more easily throughout the country. In exchange for this charter, banks had to hold a 25 percent reserve against both notes and deposits—a much higher requirement than that faced by most state banks. Although banks in "redemption" cities—designated in the act as cities where notes were likely to accumulate for redemption—had to hold reserves entirely in the form of "lawful" money (specie or greenbacks), banks outside these cities could maintain 60 percent of their reserves in interest-bearing balances at banks in redemption cities.

Reserve requirements were seen as necessary for ensuring the liquidity of national bank notes and thereby reinforcing their acceptability as a medium of exchange throughout the country. Concentrating reserves in areas where demands for liquidity were likely to be most acute was thought to be the surest means of promoting the widespread use and acceptance of national bank notes, At the same time, allowing banks outside redemption cities to earn interest on a portion of their reserves made the burden of reserve requirements less onerous for banks that faced more limited demands for liquidity.

A series of bank runs and financial panics in the late nineteenth and early twentieth centuries made it patently clear that reserve requirements could not really guarantee the convertibility of deposits for the entire banking system. In fact, reserve requirements were really no help at all in providing liquidity during a panic because a given dollar of reserves could not be used simultaneously to meet a customer’s demand for cash and to satisfy reserve requirements. What was lacking from the national banking system or, for that matter, from any fractional reserve system—one with reserve requirements of less than 100 percent—was a mechanism for accommodating temporary variations in the public’s demand for liquidity by adjusting the quantity of reserves available to the entire banking system. Absent such a mechanism, systemic panics and crises stemming from fluctuating liquidity needs were all too common. Though an individual bank might be able to meet a temporary surge in the demand for cash with little attendant adverse effect on the economy, the banking system as a whole could not without selling securities or calling in loans, thereby squeezing credit supplies, driving up interest rates, and precipitating a general financial crisis.[2]

Creation of the Federal Reserve System 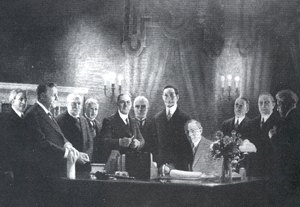 The Federal Reserve Act of 1913 created a system of Reserve Banks that could act as lenders of last resort by accommodating the temporary liquidity needs of the banking system and thereby alleviating the periodic financial disruptions that plagued the national bank era. By discounting eligible assets of member banks, Federal Reserve Banks provided a ready, accessible source of liquidity that had been missing from the national banking system.

Although the creation of the Federal Reserve System seemingly eliminated any remaining liquidity rationale for reserve requirements, banks that were members of the System were still required to hold reserves, though requirements were lower than those previously in effect for most national banks. In the original Federal Reserve Act, banks had to hold in reserve different percentages of their demand deposits—deposits that could be withdrawn on demand—depending on whether they were classified as central reserve city banks (18 percent), reserve city banks (15 percent), or country banks (12 percent).5 In addition, all member banks faced a 5 percent requirement on time deposits.6 Member banks outside central reserve cities were not allowed, however, to meet part of their requirements with interest-bearing balances at a bank in a central reserve city. Starting in 1917, moreover, member banks could no longer use vault cash to satisfy reserve requirements: They had to meet their requirements entirely with non-interest bearing balances at a Federal Reserve Bank.[2]

Fractional reserve under a gold standard

Historically, when customers lost confidence in a bank's ability to repay its obligations, a bank run would start, where bank customers would crowd the offices of the bank in the attempt to recover their money before the bank ran out. Under a gold standard, some fraction of the required reserves are held in gold, and there is an extrinsic limit on the money supply which cannot be exceeded without relaxing the reserve requirement or devaluating the currency, both of which risk causing large-scale bank runs.

Economists of the Austrian School of Economics believe that the Great Depression was triggered by credit crises caused by reaching the limit of credit which was available without going off the gold standard, and compunded by bad economic policy responses by large governments.