Fluid flow past a cylinder

Fluid flow past a cylinder is classical mathematical solution for the flow of an inviscid, incompressible fluid around a cylinder that is transverse to the flow. Far from the cylinder, the flow is unidirectional and uniform.

"The flow of an incompressible fluid past a cylinder is one of the first mathematical models that a student of fluid dynamics encounters. This flow is an excellent vehicle for the study of concepts that will be encountered numerous times in mathematical physics, such as vector fields, coordinate transformations, and most important, the physical interpretation of mathematical results." [1] 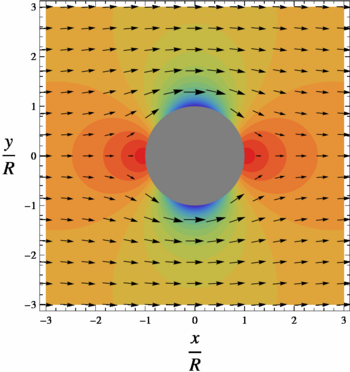 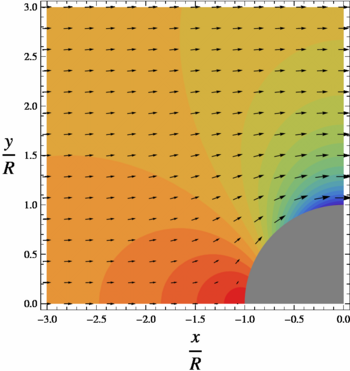 PD Image
Close-up view of one quadrant of the flow. Colors: pressure field. Red is high and blue is low. Velocity vectors. 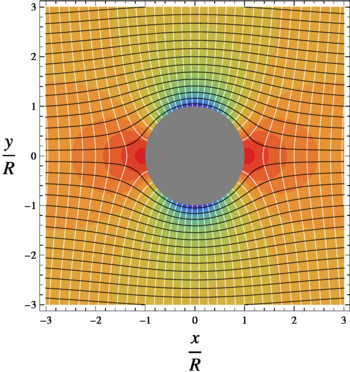 from bottom to top, velocity potential (white) with contour interval

from left to right.

A cylinder (or disk) of radius

is placed in two-dimensional, incompressible, inviscid flow. The goal is to find the steady velocity vector

in a plane, subject to the condition that far from the cylinder the velocity vector is

is a constant, and at the boundary of the cylinder

is vector normal to the cylinder surface. The upstream flow is uniform and has no vorticity. The flow is inviscid, incompressible and has constant mass density

. The flow therefore remains without vorticity, or is said to be irrotational, with

everywhere. Being irrotational, there must exist a velocity potential

is obtained most easily in polar coordinates

, related to conventional Cartesian coordinates by

. In polar coordinates, Laplace's equation is:

The solution that satisfies the boundary conditions is [2]

Being invisicid and irrotational, Bernoulli's equation allows the solution for pressure field to be obtained directly form the velocity field:

far from the cylinder, where

In the figures, the colorized field referred to as "pressure" is a plot of

On the surface of the cylinder, or

, pressure varies from a maximum of 1 (red color) at the stagnation points at

to a minimum of -3 (purple) on the sides of the cylinder, at

varies from V=0 at the stagnation points to

on the sides, in the low pressure.

The flow being incompressible, a stream function can be found such that

It follows from this definition, using vector identities,

Therefore a contour of a constant value of

will also be a stream line, a line tangent to

. For the flow past a cylinder, we find:

Laplace's equation is linear, and is one of the most elementary partial differential equations. This simple equation yields the entire solution for both

because of the constraint of irrotation and incompressibility. Having obtained the solution for

, the consistency of the pressure gradient with the accelerations can be noted.

The dynamic pressure at the upstream stagnation point has value of

The low pressure on sides on the cylinder is need to provide the centripetal acceleration of the flow.

is the radius of curvature of the flow. But

. The integral of the equation for centripetal acceleration, which will over a distance

The exact solution has, for the lowest pressure,

The low pressure, which must be present to provide the centripetal acceleration, will also increase the flow speed as the fluid travels from higher to lower values of pressure. Thus we find the maximum speed in the flow,

, in the low pressure on the sides of the cylinder.

is consistent with conservation of the volume of fluid. With the cylinder blocking some of the flow, V must be greater than U somewhere in the plane through the center of the cylinder and transverse to the flow.

Comparison with flow of a real fluid past a cylinder

This symmetry of this ideal solution has the peculiar property of having zero net drag on the cylinder, a property known as D'Alembert's paradox. Unlike an ideal inviscid fluid, a viscous flow past a cylinder, no matter how small the viscosity, will acquire vorticity in a thin boundary layer adjacent to the cylinder. Boundary layer separation can occur, and a trailing wake will occur behind the cylinder. The pressure will be lower on the wake side of the cylinder, than on the upstream side, resulting in a drag force in the downstream direction.