Feedback is the use of information from the monitoring of system performance either to modify or to maintain that performance.

"Feedback is the use of a measurement of some aspect of system behavior to correct or adjust that behavior."[1]

Unlike feedforward control, which anticipates a need for change, feedback introduces change only as a response to a change in behavior.[2]

Feedback typically is seen as negative or positive, and in control theory negative feedback is any form of feedback in which a change in system behavior causes the feedback to oppose that change, while positive feedback tends to augment the change.[3][4] In biology, the term bipolar feedback sometimes is used to describe interacting systems, where the outputs of coupled systems affect each others' inputs.[5] 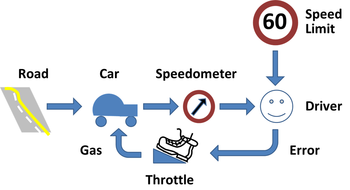 An everyday example of negative feedback to control a system is shown at the left, where a car is maintained at the speed limit by a driver using the throttle (accelerator) to adjust to road conditions (for example, curves or grades). The car's speed is decided by a combination of the road conditions and the gas supplied. The gas supplied is the system feedback, the amount of which is controlled by the driver who compares the speedometer reading with the speed limit and reduces the error.

It might be noted that translation of signals between various forms (such as temperature, chemical signals, electrical signals, mechanical signals) occurs throughout the feedback loop. Also, there are time delays introduced at each step in a feedback loop that affect its success in tracking variations in the world's input.

The same principle is found in biology as homeostasis.[7]

To discuss the general example, some formal terminology that does not depend upon the specific system is useful.[8]

Diagrams that are rearrangements of the block diagram above are found in many sources.[9][10]

Using the image at right, and labeling the input I and the output O, the gain O/I of the amplifier is found as follows:

Here the approximate form results in the usual case where βAOL >> 1. Assuming the feedback network is well-controlled, for example, being made up of passive elements such as resistors, so long as βAOL >> 1, the gain of the feedback amplifier is stable, predictable, and linear. There are other advantages to negative feedback in amplifiers.[11]

It is quite common in electronics literature to call the difference I–βO the "error", and some sources confound this "error" with the use of that term in error-controlled regulation. However, although called an error, the amplifier circuit makes no attempt to minimize or otherwise reduce the difference I–βO, which is given by:

and is therefore fixed by the arbitrary input signal I and the invariant values of β and AOL, and is not 'adjusted' as a matter of circuit operation. In addition, of course, I and O are the signal and the amplified signal, neither acting as a set-point for some internal system variable, as used in computing the error in error-controlled regulation. Although the above argument about (I–βO) shows beyond any dispute that this "error" has nothing to with "error" as something the amplifier circuit attempts to reduce, the literature is replete with blurry confusion of the negative feedback amplifier with error-controlled regulation based upon sloppy language.