Actually a light bomber rather than a fighter, as it has almost no air combat maneuvering capability, the F-117 Nighthawk is the first generation of operational stealth aircraft. Developed secretly by the Lockheed Skunk Works, it has been operational since the invasion of Panama, and had a major role in the 1991 Gulf War. While it was designated as a fighter, it has no air-to-air armament, and probably was called a fighter simply because fighters tend to be more prestigious in the United States Air Force. Its first major operational use was in the Gulf War; F-117s were the only manned aircraft allowed to fly into the extremely strong Baghdad-area KARI integrated air defense system (IADS). 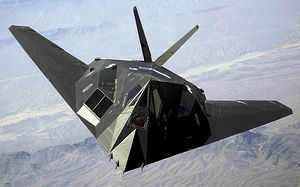 They have been retired from active service.

Rather ironically, the fundamental technical principles of the low-radar-observability aspects of stealth aircraft came from an unclassified theoretical paper, written in 1966 by a Soviet microwave researcher.[1]

The F-117A production decision was made in 1978 with a contract awarded to Lockheed Advanced Development Projects, the "Skunk Works," in Burbank, Calif. The first flight over the Nevada test ranges was on June 18, 1981, only 31 months after the full-scale development decision.[3]

To maintain stealth, the F-117 can use only passive sensors. That usually means that the precise location of the target is known at mission planning time, and, at most, the pilot might use electro-optical guidance (e.g., low-light or infrared television) to fly a weapon to an exact spot.

If there is a need for attacking a target whose position is uncertain, the target will need to be designated by laser, from a special reconnaissance team on the ground or possibly an aircraft with active sensors.

The aircraft flies only at night, and typically has a payload of two precision-guided bombs. For short-range missions, the F-117 is being replaced by the F-22 Raptor. The first 10 were retired in December 2006. [3] For longer-ranged missions against even harder IADS, the B-2 Spirit will take on the Black Jet's mission.

One aircraft has been shot down in action.

its first use was in Panama, not because there were serious Panamanian air defenses, but because it could provide the necessary accuracy for one specific mission.

During Operation Desert Storm in 1991, F-117A's flew approximately 1,300 sorties and scored direct hits on 1,600 high-value targets in Iraq. It was the only U.S. or coalition aircraft to strike targets in downtown Baghdad. Since moving to Holloman AFB in 1992, the F-117A and the men and women of the 49th Fighter Wing have deployed to Southwest Asia more than once. On their first trip, the F-117s flew non-stop from Holloman to Kuwait, a flight of approximately 18.5 hours -- a record for single-seat fighters that stands today.[3]

In 1999, 24 F-117A's deployed to Aviano Air Base, Italy, and Spangdahlem AB, Germany, to support NATO's Operation Allied Force. The aircraft led the first Allied air strike against Yugoslavia on March 24, 1999.[3]

The only F-117A to be shot down was brought down by the Serbian integrated air defense system. While no definitive analysis has been published, it has been suggested that the aircraft maneuvered to avoid the radar from a SA-6 GAINFUL, which brought it into visual (or electro-optically assisted visual) observation by anti-aircraft artillery or a fighter.