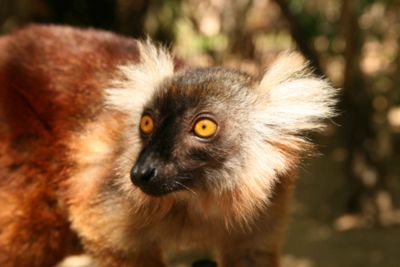 The black lemur Eulemur macaco macaco, a so called "true lemur", is a medium-sized quadrupedal Lemur. In the wild, it is found only on the island of Madagascar and small islands of the Northeast coast.

The black lemur is a cathemeral Primate that has a head body length of approximately 39 – 45 cm and a tail length of around 50-65 cm[1][2][3]. Weight ranges between approximately 3 and 3.5 kg[3]. Males are typically dark chocolate brown to black, while females have golden-brown to chesnut colored backs and light colored bellies. The female's face is grey to black, the crown a darker grey and the ears white tuffed [3]. The eyes of both sexes are orange [3]. 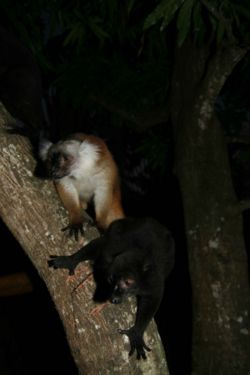 A male and female black lemur at night. Black lemurs are cathemeral and are highly active in both the day and night

The black lemur is highly adaptable to different habitats and group sizes range from 2 to 15 [3]. Females give birth to typically a single young usually between September and November[3]. 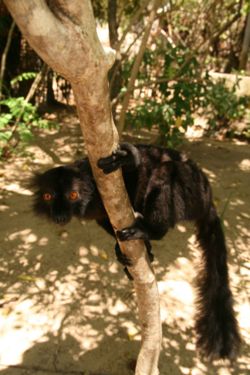 It is highly frugiverous but also eats seeds, leaves and nectar [2][3].

The black lemur may be found in tropical moist lowland and montane forested areas of northwestern Madagascar and on islands around Nosy Be[3].

The black lemur is considered to be endangered by the IUCN.