The Elizabethan Religious Settlement was Elizabeth I’s response to the religious divisions created over the reigns of Henry VIII, Edward VI and Mary I. This response, described as "The Revolution of 1559",[1] was set out in two Acts of the Parliament of England. The Act of Supremacy of 1559 re-established the Church of England’s independence from Rome, with Parliament conferring on Elizabeth the title Supreme Governor of the Church of England, while the Act of Uniformity of 1559 set out the form the English church would now take, including establishing the Book of Common Prayer.

When Mary died childless in 1558, Elizabeth inherited the throne. One of the most important concerns during Elizabeth’s early reign was religion. Communion with the Roman Catholic Church had been reinstated under Mary, but was again severed under Elizabeth. She relied primarily on her chief advisors, Sir William Cecil, as her Secretary of State, and Sir Nicholas Bacon, as the Lord Keeper of the Great Seal, for direction on the matter.

Parliament was summoned in 1559 to consider the Reformation Bill and to again create an independent Church of England. The Reformation Bill defined the Communion as a consubstantial celebration as opposed to a transubstantial celebration, included abuse of the pope in the litany, and ordered that ministers should not wear the surplice or other Catholic vestments. It allowed ministers to marry, banned images from churches, and confirmed Elizabeth as Supreme Head of the Church of England. The Bill met heavy resistance in the House of Lords, as Roman Catholic bishops as well as the lay peers voted against it. They reworked much of the Bill, changed the litany to allow for a transubstantial belief in the Communion and refused to grant Elizabeth the title of Supreme Head of the Church. Parliament was prorogued over Easter, and when it resumed, the government entered two new bills into the Houses — the Act of Supremacy and the Act of Uniformity.

The Act of Supremacy validated ten Acts that Mary had repealed and confirmed Elizabeth as Supreme Governor of the Church of England. Use of the term Supreme Governor as opposed to Supreme Head pacified many who were concerned about a female leader of the Church of England. Elizabeth's changes were more wholesale than those of her half-brother, Edward VI. All but one of the bishops lost their posts, a hundred fellows of Oxford colleges were deprived; many dignitaries resigned rather than take the oath. The bishops who were removed from the ecclesiastical bench were replaced by appointees who would agree to the reforms.

On the question of images, her initial reaction was to allow crucifixes and candlesticks and the restoration of roods, but some of the new bishops whom she had elevated protested. In 1560 Edmund Grindal, one of the Marian exiles now made Bishop of London, was allowed to enforce the demolition of rood lofts in London and in 1561 the Queen herself ordered the demolition of all lofts.[2] Thereafter, the determination to prevent any further restoration was evidenced by the more thoroughgoing destruction of roods, vestments, stone altars, dooms, statues and other ornaments. The queen also appointed a new Privy Council, removing many Roman Catholic counsellors by doing so. Under Elizabeth, factionalism in the Council and conflicts at court greatly diminished. The Act of Supremacy had passed without difficulty. 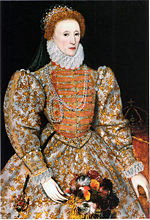 Queen Elizabeth I of England reached a moderate religious settlement which became controversial after her death.

The Act of Uniformity 1559, which forced people to attend Sunday service in an Anglican church, at which a new version of the Book of Common Prayer was to be used, passed by only three votes.[3] The Bill of Uniformity was more cautious than the initial Reformation Bill. It revoked the harsh laws proposed against Roman Catholics, it removed the abuse of the pope from the litany and kept the wording that allowed for both consubstantial and transubstantial belief in the Communion.

After Parliament was dismissed, Elizabeth, along with Cecil, drafted what are known as the Royal Injunctions. These were additions to the settlement and largely stressed continuity with the Catholic past — ministers were ordered to wear the surplice. Wafers, as opposed to ordinary baker's bread, were to be used as the bread at Communion. There had been opposition to the settlement in the shires, which for the most part had Roman Catholic sympathies, though the opposition was considerably modified by the fact that many of the gentry had benefited considerably from the plunder of the church under Henry and Edward. The changes therefore helped to consolidate acceptance of the Settlement. What succeeded more than anything else was the sheer length of Elizabeth's reign; while Mary had been able to impose her programme for a mere five years, Elizabeth had more than forty. Those who delayed, 'looking for a new day' when restoration would again be commanded, were defeated by the passing of years.[4]

The settlement is often seen as a terminal point for the English Reformation and in the long run the foundation of a "via media" and the concept of Anglicanism. At the time it was believed to have established a Protestant Church.[5] Although Elizabeth "cannot be credited with a prophetic latitudinarian policy which foresaw the rich diversity of Anglicanism", her preferences made it possible.[6] To some it can be said to represent a compromise in wording and practice between the first Prayer Book of Edward VI (1549) and the Second Prayer Book (1552). For example, when Thomas Cranmer first wrote the Book of Common Prayer, which came into operation in 1549, it contained the words "The Body of our Lord Jesus Christ which was given for thee, preserve thy body and soul unto everlasting life." The 1552 edition, which was never in force, replaces these words with "Take and eat this in remembrance that Christ died for thee, and feed on him in thy heart by faith, with thanksgiving." However, some liturgical scholars such as Gregory Dix, Ratcliff, and Couratin would say that both prayer books taught the same eucharistic doctrine, albeit more cautiously in the first book.[7] The Act which authorised the second book spoke of it as explaining and making 'fully perfect' the first book.[8] Finally, the 1559 book, published under Matthew Parker during the reign of Elizabeth, includes both phrases.[9]

By the time of Elizabeth's death, there had emerged a new party, "perfectly hostile" to Puritans, but not adherent to Rome. The Anglicans, as they came to be called later in the century,[10] preferred the revised Book of Common Prayer of 1559, from which had been removed some of the matters offensive to Catholics.[11] A new dispute was between the Puritans, who wished to see an end of the prayer book and episcopacy and the Anglicans, the considerable body of people who looked kindly on the Elizabethan Settlement, who rejected 'prophesyings', whose spirituality had been nourished by the Prayer Book and who preferred the governance of bishops.[12] It was between these two groups that, after Elizabeth's death in 1603, a new, more savage episode of the English Reformation was in the process of gestation.

During the reigns of the Stuart kings, James I and Charles I, the battle lines were to become more defined, leading ultimately to the English Civil War, the first on English soil to engulf parts of the civilian population. The war was only partly about religion, but the abolition of prayer book and episcopacy by a Puritan Parliament was an element in the causes of the conflict. As Diarmaid MacCulloch has noted, the legacy of these tumultuous events can be recognised, throughout the Commonwealth (1649-1660) and the Restoration which followed it and beyond. Anglicans were to become the core of the restored Church of England, but at the price for further division. At the Restoration in 1660 Anglicans were to be but part of the religious scene, which was to include various kinds of non-conformity.