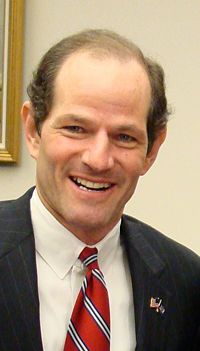 Eliot Spitzer (1959-) is an American attorney and Democratic politician who was the 54th Governor of New York from 2007 to 2008. Prior to his tenure as governor, he served as the law clerk of Judge Robert W. Sweet and Attorney General of New York, during which he vigorously prosecuted white collar crime on Wall Street and combated gangsterism in the state. In 2006 he was elected governor by landslide. However, his short term was marked by strife with the Republican-dominated Senate, failed policy proposals, and scandals. In March, 2008, an IRS investigation unearthed links between Spitzer and a prostitution ring, which led to his resignation.