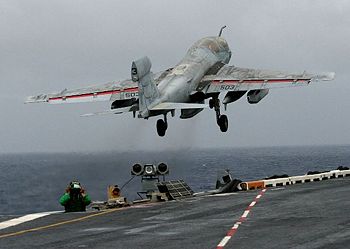 This aircraft provides a wide range of electronic warfare functions. It can carry out electronic attack such as jamming or deceptive signal generation. It can gather tactical and strategic electronic intelligence, also called electronic support in a tactical context. It can fire AGM-88 HARM anti-radiation missiles.

On both the EA-6B and the EF-18, the primary electronic attack system is the AN/ALQ-99, receivers and antennas for which are mounted inside the tail, and a variable number of jamming transmitters carried as underwing pods.

The aircraft has a variety of defensive systems, including the AN/ALE-47 intelligent decoy launcher.