A Duiker is any of 16 small to medium-sized antelope species from the Bovidae family. They are native to Sub-Saharan Africa.

All have the same distinctive body type with an arched back and pointed face. Although the different species vary in size from the largest yellow-backed duiker (weighing up to 175lbs) to the tiny royal antelope (weighing just 1.5kg/3.3lbs). Full adult coloration is approximately obtained at one year of age. The species are differentiated into two groups, bush and forest. Bush females are larger than males, they are usually hornless. Male and female forest duikers are about the same size and both have horns. The extent of there horns are small and spike like, lying flat against the head, not useful for fighting.[2] The hind legs are longer than the front legs allowing quick springs to penetrate thickets. 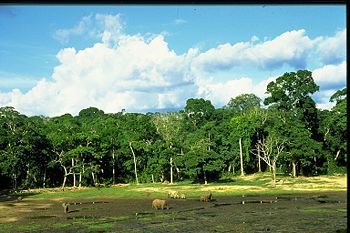 Found in thick brush and forest over most of Africa. The blue duikers are found in West and central Africa (including parts of Tanzania, Uganda and western Kenya). The gray, or common duiker, (Sylvicapra grimmia) is found from Ethiopia to the Cape of Good Hope and West to Senegal.

The duiker has a varied range of feeding habits. Most of their diet consists of foliage from bushes and trees. Their small size limits the reach of food sources. Berries and fruit that have fallen naturally (or picked and dropped by other animals) are essential in every day diet. This leads to behavior of actively following beneath canopy foragers, where they compete with bush pigs and porcupines. Figs are a high percentage of the diet. They have a large mouth that allows them to feed on sizable fruits, mushrooms and other bulky items. Occasionally duikers may eat insects, small vertebrates, and birds. In Tanzania, a picture was taken of an abbot's duiker with a large frog in its mouth (BBC Wildlife 22:10). These creatures are an omnivore, meaning an animal that feeds on both animal and plant substances. This broad-based subsistence means duikers are not specifically adapted to only eat and digest either meat or plant material.

Crowned eagles and leopards are among the most significant predators of duikers. Duikers will freeze and crouch to escape detection, if diving into the bush is not an option. Natural enemies are the lion, cheetah, hunting dog, hyena, jackal, python, baboon, and crocodiles. Humans have an impact on this species as well. As forest dwelling people populations have increased the demand for bush meat. This is a term commonly used for meat of terrestrial wild animals. Specifically focusing on the: zebra duiker, ogilby's duiker, black duiker, jentink's duiker, yellow back and the white bellied duiker.[3] Aders’ duiker (Zanzibar duiker) is the rarest and most endangered of Africa’s 16 forest duiker species.

Africa's various antelope are classified into over 70 species. These are divided into nine tribes, of which the Cephalophini is the largest, with 16 species.[4]