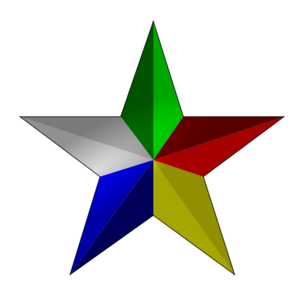 The symbol of the Druze religion is a five-pointed, five-colored star.

The Druze are a religious group in the Middle East, who's religion comes from an offshoot of Shia Islam. The origin of the name "Druze" is uncertain, but it most likely comes from Al-Darazi, one of the faith's early leaders.

The Druze religion began in the 11th century, when some of the followers of caliph Al-Hakim, leader of the Egyptian Fatimid dynasty and spiritual head of the Ismaili Shia Muslims, began to consider him a manifestation of God on Earth. The religion grew in Al-Hakim's time, but after his death, his successors declared the movement heretical and persecuted it. The Druze community was forced to flee to what is now Syria, Lebanon, and Israel, and went extinct in its native country of Egypt.

The Druze religion incorporates many ideas from neo-Platonism and Gnosticism, as well as a belief in reincarnation-none of which are present in any other sect of Islam. It also abandons belief in some of the Five Pillars of Islam, including pilgrimage to Mecca. For these reasons, most Muslims consider the Druze to be another religion, although Druze themselves claim to be Muslim. Due to their history of persecution, the Druze are extremely secretive about their faith-no conversions from other religions are accepted, and the specifics of the religion are kept secret, except from a small, hereditary class of Druze called initiates.