Dragonflies are insects belonging to the order Odonata, the infraorder Anisoptera. They are characterized by an elongated body, two pairs of strong, usually transparent wings, and large multifaceted eyes. Eyes touch in most species. Wings are held perpendicular to the body when at rest. Hindwings broaden near the base. The last three features can be used to distinguished dragonflies from damselflies. 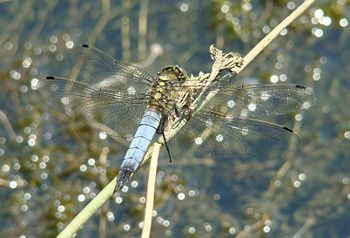 Dragonflies are a relatively large insects, measuring from about 2.5 to 9 cm in length. The head is large, concave behind, on a flexible neck. The compound eyes are large and usually fused along the mid-line at the top of the head. The head carries strong and sharp biting mouthpartsused to cut up prey, three ocelli and a pair of short antennae.

The prothorax is small, the mesothorax and metathorax are large and fused into a single, strong pterothorax. Legs are and adapted for perching and holding prey. They are in generally not used for walking.

The abdomen is elongated and flexible, with ten segments, and ends in clasping organs. Females of several families carry a prominent ovipositor under abdominal segments 9 and 10. Males have secondary genitalia under the abdominal segments 2 and 3.

They have two pairs of similarly sized long thin membranous wings. The hindwing is broader than the forewing. Both pairs of wings usually have a pterostigma (a dark or coloured patch near the eing tip) and a mass of cross veins giving them the appearance of being a mesh. There are five main vein stems. Veins are fused at wing bases. A Nodus is formed where the second main vein meets the leading edge of the wing. Almost all dragonflies settle with the wings held out sideways or slightly downward (except in one genus - Cordulephya).

Unlike most insects, Dragonflies can flap or beat their wings independently, which gives amazing manoeuvring capabilities. They can hover or fly backwards, quickly change flight direction and accelerate heavily. Larger species can easily reach 10 m/s (36 km/h), and the Austrophlebia costalis has been reported to reach 16 m/s (58 km/h) for short periods. Average cruising speed is usually somewhere around 4.5 m/s (16 km/h or 10 mph). Due to large wing surface, the dragonflies flap their wings relatively slowly, up to 30 beats per second. Dragonflies are also good gliders. Some larger species can glide for 20 m at angle of 10 degrees.

Dragonflies capture their prey by clasping them in legs studded with sharp spikes, always in flight and attacking from below. When hunting, they predominantly rely on their excellent sight. Their eyes may each contain as many as 30 000 individual lenses or ommatidia. The eyes have complex structure with different-sized facets in different regions. Facets differ in both light-collecting capabilities and spectral sensitivities. The notable dark spots on the eyes are called pseudo-pupils and indicate the directions in which the animal has the best vision. Ocelli have good light-gathering power and are used in maintaining flight orientation and stablity.

Larvae (or nymphs) are aquatic. They breath through anus, which is an enlarged cavity with special internal folds to increase the surface area. Water is pumped in and out by the muscularly system to increase water flow across the respiratory membranes.

Larvae tend to walk on the bottom, though they can speed up with jet propulsion by expelling water from their anal respiratory (breathing) orifice. They are free ranging, though they tend to hunt by stealth, sitting waiting for their prey to walk by. Some live of them also live in burrows in the mud. Larvae are carnivorous and detect their prey by sight in most cases and catching it by means of a rapidly extensible grasping modification of the labium (lower lip is called mask). At rest the mask is held folded underneath head and thorax, extending back as far or further than the front legs. To capture prey, the labium is shot rapidly forward and prey is grasped with paired, hand-like palps.

Larvae hunt any animal as large as or smaller than themselves, including their own species (canibalism), small vertebrates such as tadpoles and fish fry, and other aquatic insects.

Simply speaking, the life cycle of dragonflies include egg (usually laid in water), a free moving water dwelling larva (or nymph), and an adult. The larva lives for several weeks (or even several years in some species) underwater and undergoes a series of moults as it grows. It emerges from the water when it is ready to undergo its final moult where the skin splits to release the winged adult. 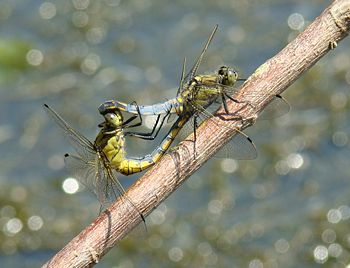 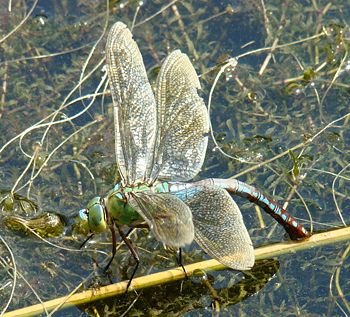 Dragonflies belong to the order Odonata, which is divided into 3 suborders: the Zygoptera or damselflies, the Anisoptera or (true) dragonflies and the Anisozygoptera. Zygoptera are characterized by the ability to fold their wings along their abdomen, which most Anisoptera can't. In Zygoptera the two pairs of wings are almost exactly equal in shape, size and venation, and there are very numerous crossveins. The members of Anisoptera (the word means 'unequal wings') have their hindwings broader than forewings. They are generally larger, stouter and better flier than Zygoptera. Sometimes the word dragonfly is commonly used for all Odonata, and the phrase true dragonflies is used specifically for the Anisoptera. Anisozygoptera is an ancient suborder that once possibly contained ancestors of both modern suborders, but now contains only two species.