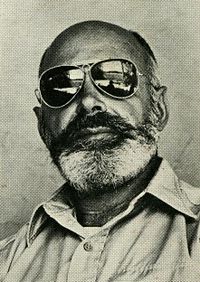 Donald Hamilton on the back cover of The Terminators, 1975

Donald Bengtsson Hamilton (March 24, 1916–November 20, 2006) was an American writer of novels, short stories, and non-fiction about the outdoors. His novels consist mostly of paperback originals, principally spy fiction, but also crime fiction and Westerns. He is best known for his long-running Matt Helm series (1960-1993), which chronicles the adventures of an undercover counter-agent/assassin working for a secret American government agency. The noted critic Anthony Boucher wrote: "Donald Hamilton has brought to the spy novel the authentic hard realism of Dashiell Hammett; and his stories are as compelling, and probably as close to the sordid truth of espionage, as any now being told." [1]

Hamilton was born in Uppsala, Sweden. He later emigrated to the United States, attended the University of Chicago (receiving a Bachelor of Science degree in 1938), and served in the United States Navy Reserve during World War II. He was married to Kathleen Hamilton (née Stick) from 1941 until her death in 1989. The couple had four children: Hugo, Elise, Gordon, and Victoria. He died in Massachusetts in November of 2006. For unknown reasons, his death went unremarked by any of the major newspapers—no obituaries appear to have been written.

A long-time resident of Santa Fe, New Mexico, Hamilton was a skilled outdoorsman and hunter who wrote non-fiction articles for outdoor magazines and published a book-length collection of them. For a number of years after leaving Santa Fe he lived on his own yacht, then relocated to Sweden where he resided until just before his death. A number of his Matt Helm novels are situated in the Santa Fe area and American Southwest in general; as Hamilton developed an interest in boating, many of the books then began to have a nautical background as well.

Hamilton began his writing career in 1947, as American publishers began to experiment with issuing original paperback fiction. Most of his first eleven novels, published between 1947 and 1959, were typical paperback originals of the era: fast-moving, formulaic tales with lurid covers and limited characterization. The most interesting of them is, arguably, Assignment: Murder, (alternate title: Assassins Have Starry Eyes), in which a mathematician working on nuclear bomb design has to save his kidnapped wife from a pair of shadowy villains. At least three of his novels, however, from this period were first published as hardbacks by Holt, Rinehart and Winston.

The Matt Helm series, which began with Death of a Citizen in 1960 and ran for 27 books (ending with The Damagers in 1993 although another Matt Helm book, The Dominators, was completed in 2001-2002 and has yet to be published), was more substantial. Helm, a wartime agent in a secret agency that specialized in the assassination of Nazis, is drawn back into a post-war world of espionage and assassination after fifteen years as a civilian. He narrates his adventures in a brisk, matter-of-fact tone with an occasional undertone of deadpan humor. He describes gunfights, knife fights, torture, and (off-stage) sexual conquests with a carefully maintained professional detachment, like a pathologist dictating an autopsy report or a police officer describing an investigation. Over the course of the series, this detachment comes to define Helm's character: he is a skilled professional doing a job that he's good at; the job just happens to be killing people.

Helm's cold professionalism invites comparison with Ian Fleming's James Bond, but he does not share Bond's materialism or hedonism. He has more in common with Sam Spade, the private-eye hero of Dashiell Hammett's The Maltese Falcon, or Stephen Hunter's master sniper Bob Lee Swagger.

General audiences may be more familiar with Matt Helm through a series of popular action-comedy films produced in the late 1960s starring Dean Martin in the title role. These films are only very loosely based upon Hamilton's writings. As of 2006, however, a more serious adaptation of the Matt Helm novels was in the early planning stages, with DreamWorks holding the film rights to Hamilton's books.