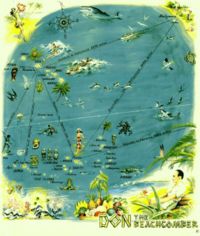 The front cover from a Beachcomber menu circa 1959 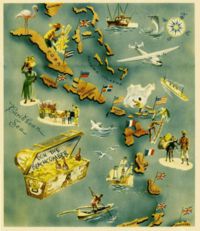 The back cover from a Beachcomber menu circa 1959

Don the Beachcomber, or Donn Beach, (February 22, 1907 — June 7, 1989) was the originator of the Tiki bars, restaurants, and nightclubs that enjoyed great popularity for a number of years in the United States, particularly from the late 1940s through the mid-1960s. Although dead for nearly two decades now, he and his amicable rival Trader Vic are still remembered for their once-widespread restaurant chains and their association with the pop culture known as "Tiki". Equally important, but far less known, is Beach's influence in helping originate the South Seas look and ambiance of the Hawai'ian tourist industry that has now been indelibly associated with that state for more than 50 years.

The son of an successful oil-field wildcatter in Texas, Beach was born Ernest Raymond Beaumont-Gantt in Louisiana.[1] Gantt was a youthful sailor on other people's yachts in the Pacific and the Caribbean and a small-time bootlegger before opening his first tropically themed bar on a small sidestreet in Hollywood not long after the end of Prohibition. Although a few establishments with similar decorations had existed before in the Hawaiian Islands, the eventual explosion of so-called "Polynesian" restaurants was directly descended from this initial 1933 bar.

First called "Don's Beachcomber,"[2] Gantt's tiny bar was an instant hit with a number of Hollywood movie stars such as Charlie Chaplin and Marlene Dietrich. The bar soon moved to larger quarters across the street, where food was added, the name slightly modified, and the chain of Don the Beachcomber restaurants was born. All of the Beachcomber's restaurants, and most of their many imitators, of which Trader Vic's were the most famous, offered tropical decor, often with flaming torches, exotic rum drinks, and Cantonese food. At the height of his success, Beach had a dozen or more restaurants bearing his name and was the world's largest purchaser of rum. And after years of being called "Don the Beachcomber", Gantt legally changed his name to "Donn Beach". He was the creator of dozens of rum cocktails, particularly the Zombie, which was served to thousands of people at the 1939 New York World's Fair by an unscrupulous imitator of the Beachcomber named Monte Proser. Beach was also an important promoter of the Hawaiian Islands and an entrepreneur who developed various projects in Honolulu, including the International Market Place, where, for a few years, he maintained his headquarters in a treehouse in the limbs of the market's enormous central banyan tree. He later built an elaborate houseboat, the Marama, a prototype for what he hoped would be floating housing in Hawaii but failed to get the zoning for it. Beach eventually shipped the houseboat to Moorea, the sister island of Tahiti, and lived there in retirement for a number of years before dying in Honolulu. 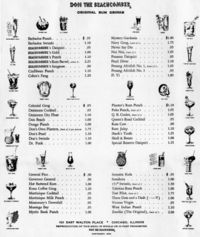 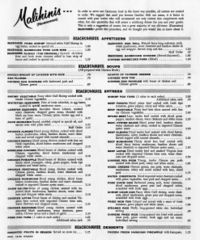 As well as being a successful businessman, Beach was also apparently a blythe spirit and bon vivant who greatly enjoyed his friendship with beautiful Islanders, high-ranking military officers during World War II, and Hollywood celebreties. His jocular notion of "The Ideal Breakfast" was "One bunch bananas, One bottle rum, One Parrot, The parrot is to eat the bananas."[3] For many years, he and his amicable rival Trader Vic bickered about which of them had actually invented the well-known mai tai cocktail. Most sources agree that Trader Vic was its creator, in 1944, but there are still those who champion the Beachcomber.[4]