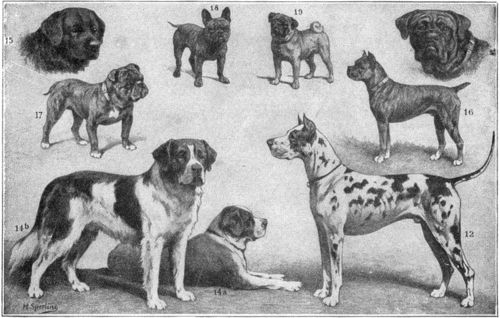 A dog breed is a group of dogs that share a set of very similar features, including a characteristic appearance and behavior. The attributes that make a certain breed recognizeable as that breed are generally written into a formal "breed standard" by breed clubs, although some dog organizations do not use formal standards.

Some breeds have been defined primarily by their ability to do a job, like hunt, herd - or fight. Whether or not the animal is currently used in its traditional role, a good specimen of the breed retains the characteristics that enable it to carry out that original purpose.

Other breeds are more strictly defined by their appearance. Appearance includes a wide range of details such as the shape and proportions of the muzzle, the color of the coat, and the set of the tail. These details are called conformation points; they describe how well the animal conforms to the written breed standard.

No matter how much the appearance of an animal differs from one dog breed to the next, all dogs are the same species, Canis familiaris. That means that all fertile dogs are capable of mating with each other and producing puppies. If a breed "breeds true", then the progeny of two parents of a single breed will produce pups that share the breed characteristics. 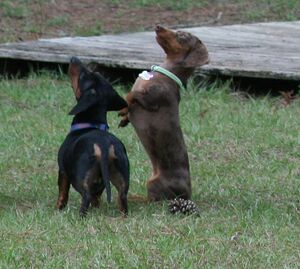 Long in the body and short in the leg, Dachshunds are a distinctive breed of hound dog.

It's easy to forget that until the industrial revolution brought us machines, animals were responsible for a great deal of labor. The routine place of a dog among people in past eras was as some kind of worker. Almost all of the known breeds from ancient times were specialized for some sort of job.

"The archeologic record suggests that the first domestic dogs are found in the Middle East approximately 14,000 years ago".[1]. There is every reason to believe that selective breeding for specific characteristics has occurred for thousands of years.

However long people have been breeding dogs, most of today's dog breeds have only been around for the last hundred years or so in their current forms. In the 1870s, kennel clubs were founded and kept records of breeds, setting breed standards and registering individual dogs. Those animals with credentials from the breed registries ("papers") are said to be "purebred". In show dogs, only individuals whose mother and father are both registered members of the breed are able to be registered, and considered purebred.

Breeders whose aim is to produce good working and field dogs, and those owners involved in disciplines involving working, hunting and trialling dogs, have traditionally been among the most vocal objectors to dog breeds maintained on the basis of looks alone. Among the objections raised are:

One of the most contentious issues in dog breeding today is defining the point at which a distinct group of dogs becomes a breed. Traditionally, this has been easier with dogs bred to purpose; later, dogs were selected for appearance as well. As dog breeds have become more refined, the point at which a new variety becomes a breed can be difficult to decide. National kennel clubs often differ in their recognition of breeds and rare breeds might not be recognised outside their home countries. So a breed's status as being a "recognized" pure breed does not indicate how long it has been in existence as a distinct breed. Usually, only dogs recognized by a kennel club are eligible to compete in that specific club's conformation shows and dog sports, although many dog sports allow any healthy dog to compete regardless of the breed or registration. 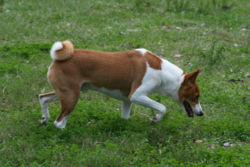 The Basenji is a distinctive African dog breed

Everything that distinguishes one breed of dog from another does so in the minds of humans, not dogs. Each named breed of dog fits a human image of a particular variety of canine. Generally, before a type of dog is recognized as a breed, it must be shown that mating a pair of that type always produces dogs that have the same characteristics as other individuals in the breed, rather than any of the component breeds, usually both in appearance and in behavior. This is known as breeding true, a concept that is well-established, even if there are still some problems in its implementation. For example, even dogs with multi-generational pedigrees can occasionally "throw back" to an undesirable characteristic, due to recessive genes. There is also the problem of natural variants, as in coat colour and ear carriage. These are also controled by genes, and variations are natural. How dog breed enthusiasts deal with such variations is by no means set in stone. Whether puppies with a differing coat colour or pattern, for example, are considered bona fide members of the breed, members of a variant breed, members of a different breed or dogs with a disqualifying "fault", unacceptable for breeding, differs from club to club and country to country, and there is sometimes bitter acrimony.

Not all dog breeds were created by people. Some came about because a group of domestic dogs were isolated from other dogs by geographic barriers, and over the generations produced progeny that were all, or mostly, of a recognizable type. These breeds, called natural breeds, often originated in mountainous areas or islands. If they had qualities that people found attractive or useful, such distinctive dogs were further bred by fanciers using artificial selection - that is, puppies were born to females whose mates were chosen by the breeders, rather than left up to the dogs. An example of a dog breed that is the result of both natural selection in an isolated area and selective breeding by dog fanciers is the Newfoundland.

See selective breeding for a detailed discussion on the process of developing and defining animal breeds, and registry (animal) for a discussion of recording and maintaining breeds as well as the concepts of stud books and papers. Refer to dog group for a review of how dog breeds are organized.