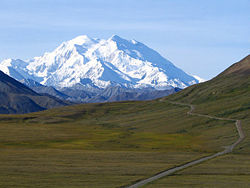 (PD) Photo: U.S. National Park Service
A view of Mt. McKinley, with the Park Road in foreground, in Denali National Park and Preserve.

Denali National Park and Preserve is a large and wild park in central Alaska, the highlight of which is the tallest mountain in North America, the 20,320-foot tall Mount McKinley (also called Denali). While abundant wildlife can be viewed throughout Alaska, Denali is a special place. The park teems with caribou herding in the valleys, moose alongside ponds, grizzly bears and wolves tramping through the brush, and dall sheep and mountain goats on cliffs. The park is over 9,419 square miles in size--larger than New Hampshire.

A single road cuts through the park, north of Mt. McKinley, the 17,400-foot Mount Foraker, and the rest of the Alaska Range. Visitors to the park must ride slow-moving park buses, and a trip just along the full 91-mile Park Road, which extends only halfway across the breadth of the park, takes all day.

The park was established in 1917 as Mount McKinley National Park. In 1980, the national park's size increased, national preserve land was added, and its name was changed to its present name of Denali.