Deconfliction is a military and engineering term that refers to the process of avoiding mutual interference, or outright hazards, among systems under the control of one's own sides. It is most often used in the context of preventing fratricide, or having weapons hit one's own troops, but it has broader implications.

Geographic boundaries are normally established in front of, and between, friendly forces, in which, variously, no fires are allowed without senior command approval, there are restrictions on firing, or fire is authorized on identified or preplanned targets. One example is the FEBA, or Forward edge of the battle area: 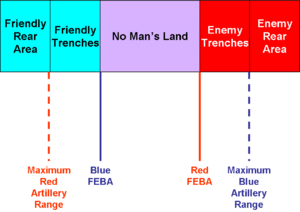 FEBA of both sides 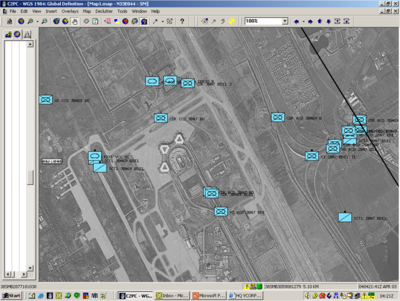 For example, frequency deconfliction is an important part of military electronics planning. Another term for a similar concept is eliminating mutual interference. Many tactical radios are short range, so the same frequency can be used in different locations without mutual interference. A tactical reorganization without frequency deconfliction, however, could put, side-by-side, units trying to operate on the same frequency. A more subtle example of electronic conflict involves an enemy frequency, if one intelligence unit is gathering information from intercepting it, but another unit jams it in the interest of denying its use to the enemy. Hard decisions may need to be made if the value of the intelligence is greater than the value of the communications to the adversary's operations.

Air traffic control and distributed systems such as the Traffic Alert and Collision Avoidance System are basic examples of deconfliction, which avoid aircraft from flying into one another. Deconfliction here involves planning adequate physical separation, monitoring potential collisions, and having standard procedures for taking evasive action. In military operations, preparation of the air tasking order is the fundamental process for deconfliction.

The ADAM cell in U.S. Brigade Combat Team headquarters is a new organization responsible for deconflicting the airspace over the FEBA.

Various weapons can conflict with one another, although friendly forces are not involved. This is especially the case with nuclear weapons. After a nuclear burst, the local atmosphere is disturbed sufficiently that another warhead, passing through that disturbed air, may be thrown off course or even destroyed. When attacking a series of targets, assuming the missiles are coming from the north, a "ladder-north" targeting technique is appropriate: the southernmost target is hit first, and the successive targets "walk" north so a reentry vehicle never needs to fly through air disturbed by an earlier burst.

Cruise missiles using terrain contour mapping can conflict. They follow a precise internal map of ground terrain; it has been found that missiles can go off course if an earlier missile destroyed a building that a subsequent missile expected to use as a landmark.

Artillery should not fire through the same space through which one's aircraft or missiles will fly. Another deconfliction method is to require friendly aircraft never to fly below a certain altitude over a battlefield, so the ground troops can use air defense weapons on low-flying targets.