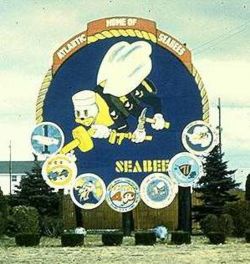 The famous U.S. Naval Construction Battalion "Seabee" at the entrance to Davisville; the Seabees trained at Camp Endicott on the base.

Davisville, Rhode Island was the former home of the U.S. Navy SeaBees. It was located at Quonset Point on Narragansett Bay, an area now included in the town of North Kingstown. The Navy acquired the property in 1939 and built Naval Air Station Quonset Point. In 1942, adjoining properties were developed for training SeaBees, including the Naval Construction Battalion Center (NCBC) at Davisville. After World War II, the Naval Air Station remained in operation, but the NCBC was inactive until 1951, when the site was designated Headquarters, NCBC. The Naval Air Station was decommissioned in 1974, and the Davisville activities shrunk to insignificance. The last Davisville naval facility was decommissioned in April, 1994.

The area contains contamination from waste from the former naval activities, and has been a focus of debate about redevelopment. As of 2007, the area contains a small port, and the Rhode Island Economic Development Corporation is working to develop a 3000+ acre business park on the site. The park has a 138-acre 18-hole public golf course that is owned by the Town of North Kingstown. It is a major recreational aesthetic feature and is heavily used. Other amenities include a marina, a high-speed ferry, a child day care facility, and restaurants with meeting and banquet facilities as well as catering services.

The Navy established the Naval Construction Battalion Center (NCBC) Davisville on February 27, 1942 on a 1285 acre site in the town of North Kingstown, about 18 miles south of Providence, RI. In 1968, NCBC Davisville became the homeport of the Atlantic Fleet Seabees, including 10 Seabee Construction Battalions and about 8,500 military personnel. During the 1970s and 1980s, the installation served as mobilization base for the active-duty training of Seabee Reserves.

In February of 1942, the Navy acquired approximately 840 acres just north of Quonset and established the first Advance Base Depot at what would become the Davisville Naval Construction Battalion Center. As the need for new facilities continued to grow, the Battalion Center expanded to encompass 1,892 acres, and a number of different functional divisions were added. Total acreage included 85 acres on a separate plot in West Davisville. Later in 1942, Camp Endicott was established as the Naval Construction Training Center. Endicott was constructed on 475 acres of the Advance Base Depot and specialized in training the Navy's Construction Battalions, or "Seabees," to meet the challenges of building new bases, often in remote overseas areas. To the north of Camp Endicott along Davisville Road, Camp Thomas provided lodging for service people embarking for or returning from overseas duty. The Advance Base Depot and Warehouse Triangle, also located along the main artery of Davisville Road, provided storage and assembly space for vast quantities of materials shipped to the Navy's advance bases worldwide.

After the close of World War II, Davisville's function shifted several times to meet the scaled-back and changing needs of the Navy. Many temporary buildings were demolished, and the base was mothballed for five years until its reactivation upon the outbreak of the Korean War. The base continued to serve as a Seabee training center and support facility for Naval construction operations worldwide, and in the early 1950's sixty-four new structures were built. In 1954, Davisville took on support responsibilities for Operation Deepfreeze in Antarctica, a continent whose strategic importance had increased with growing animosity between the United States and its Cold War enemies. During the Vietnam War, Davisville once again served as a major training facility for Seabees, and the base shipped over 450,000 tons of equipment over the course of the conflict.

Though Davisville remained functional through the 1970's, activity gradually tapered off as the military's strategic focus shifted toward the Pacific Ocean. By the 1980s, Davisville's facilities had been stripped back to a skeleton crew and many of its buildings were sealed. Primary activities at this time included the training of reserve units. By 1993, there were fewer than 25 people working at Davisville Naval Construction Battalion Center. Davisville saw its final days as the Cold War drew to a close. It was finally decommissioned on April 1, 1994.