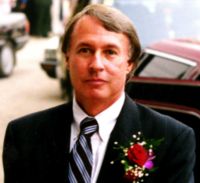 David M. Alexander, born in 1945 in upstate New York, is a writer of science fiction and mysteries who now lives in Palo Alto, California. Novels published under his own name are The Chocolate Spy, Fane, and My Real Name Is Lisa. Beginning in 2003, however, to avoid confusion with other writers with the same name, he began publishing under the pen name of David Grace: in that year Wildside Press published The Eyes Of The Blind under the David Grace name. All subsequent works, both novels and stories in magazines, have been published as by David Grace. He has written ten stories for leading magazines: science-fiction for Analog and mysteries for Alfred Hitchcock's Mystery Magazine. Alexander shared story credit with Dan Wright and Sam Egan for an Outer Limits TV series episode, "Joyride", starring Cliff Robertson that was broadcast during the 2000 season.

The film rights for My Real Name Is Lisa were optioned for a substantial amount of money for a two-hour television movie but because of casting issues the project was terminated. It has never subsequently been filmed.

Alexander graduated from Stanford University in 1967 with a major in history and a minor in economics, then received a Doctor of Laws degree from the University of California Law School, Boalt Hall, in June 1970, graduating in the top ten percent of his class. He was licensed to practice law in California in January 1971 and in November 1977 was sworn in by Chief Justice Warren Burger and authorized to argue cases before the Supreme Court of the United States.