The Darwin operating system and associated utilities is the open source, Unix-like base of Mac OS X. It makes use of the Mach-based XNU kernel.

Darwin can be run on its own as a fully functional operating system, controlled via the command line (albeit with no Graphical user interface), much the same as the FreeBSD operating system it's based on or other versions of Unix. In OS X the Darwin command-line is accessible via the Terminal emulator Terminal.app.

The "look" commonly associated with Mac OS X is provided by the Aqua user interface, which is proprietary, closed source software owned and developed independently by Apple. Darwin simply provides the "stable base" of OS X.

Many of the features of the architecture of Darwin are based on FreeBSD. 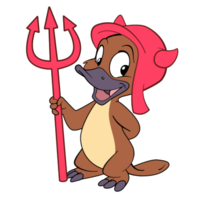 In September of 2000 a discussion was started on the Darwin Developers mailing list calling for a mascot. [1]

Because Darwin has roots in the FreeBSD operating system, it was decided that its logo would be based on the BSD Daemon, and also would be named after who was thought to be "Charles Darwin's assistant," Thomas Huxley. The real truth came to be found out later, that "Hexley" should really be "Huxley", and Thomas Huxley was known as "Darwin's Bulldog," not his assistant. By the time this mistake was found out "Hexley", had escaped into the ether and members of the community felt that it was to late too change the name to Huxley.[2]