The Copernicus satellite was launched into a nearly circular 7123 km radius orbit, inclined at 35 degrees, on 21 August 1972. The main experiment was an ultraviolet telescope. However, it also contained a cosmic X-ray experiment provided by University College London/MSSL. The main body of Copernicus measured 3 x 2 meters. The solar panels were fixed at an angle of 34 degrees to the observing axis, and were kept within 30 degrees of the Sun. This restriction resulted in certain parts of the sky being visible only at certain parts of the year. The astronomical instruments were co-aligned, with the UV telescope residing in the central cylinder of the satellite and the X-ray experiment in one of the bays surrounding it. While the UV telescope was observing, the X-ray detectors primarily took background measurements. Occasionally, the X-ray detector observed an X-ray source in the field of view of the UV target. It operated till February 1981.

The X-ray experiment There were 4 X-ray detectors in the UCL/MSSL experiment. The main detector was a proportional counter sensitive to the energy range 2.5-10.0 keV (1-3 Å). It had a simple collimation tube with a 2.5 x 3.5 degree FWHM field of view. The effective area was 17.8 cm2 with a sensitivity of about 3 mCrab. The others were two proportional counters and a channeltron, at the foci of grazing incidence telescopes. The channeltron suffered from high UV background and was not scientifically productive. The proportional counters covered the energy range 0.7-1.5 keV and 1.4-4.2 keV (6-18 Å and 3-9 Å). By the clever use of stops at the foci, the fields of view and the effective areas could be set to 10´ (12.3 cm2), 3´ (11.3 cm2), or 1´ (7.6 cm2) and 10´ (3.7 cm2), 6´ (2.4 cm2), or 2´ (1.0 cm2) for the high and low energy systems, respectively. These 2 systems became inoperable in July 1973 due to a failure of a background shutter. The basic accumulation time was 62.5 seconds, followed by 24 seconds of dead time. Thus, effectively, there was an 86.509 second sampling interval. There was a way to force better time resolution (to multiples of 1.62 s, this mode was named J20), which was used occasionally for observing bright sources, searching for bursts, etc. However this mode was used only on a few occasions and was not scientifically useful. A six channel Pulse Height Analyzer could be connected to any one of the 3 proportional counters and used to gather spectral information. 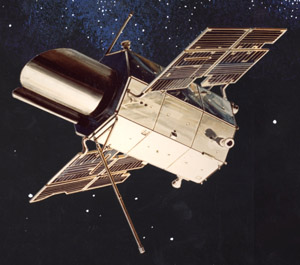