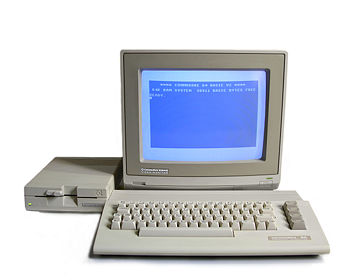 In 1982, Commodore International Ltd. introduced the Commodore 64. It was the first personal computer that had a built-in 3 channel sound device (SID Chip) with 16 color graphics, a novelty at a time when most personal computers were monochrome (like the Apple II), all at a low price and with high quality. The Commodore 64 (also known as C64) from 1982 to 1993 sold over 20 million units and during these years thousands of thousands of games and applications were developed for it.

As its main processor the 64 featured an 8-bit MOS 6502 Microprocessor, which was developed by the Commodore subsidiary Commodore Semiconductor Group.

Released in 1983, Commodore SX-64 was one of the first "portable" colour computers. It's not really portable though since it's very heavy and not very comfortable to carry around. It has a built in disk drive and an internal 5" colour monitor with sharp display. Speakers are built in as well. It has a cartridge slot on top, but no datasette interface, so playing games from tape is impossible. The SX64 wasn't very successful, and is now to be considered a collectors item.

This is the newer model of the C64, which was released in May 1986. It has a slick and trendy cream colored case. Except for the modern design, it was pretty much the same on the inside.

When one million Commodore 64-computers were sold in Germany in 1986, Commodore released a limited 'Golden Edition'. C64 GOLD was presented to the public in the BMW museum in Germany, and about 350 units were reported to exist.

C64G was the last Commodore 64-computer ever sold. The first version from 1987 was distributed by the 'Albrecht Discount'-chain and called 'Aldi-C64G'. Unlike the 'Aldi-C64', which came in a grey case, this cream-coloured C64G was released in 1989. It came in the 'Video Supergame 64' bundle, which included the cartridge 'Super Games'.

In 1990, the C64 was re-released in the form of a game console, called the C64 Games System (C64GS). A simple modification to the C64C's motherboard was made to orient the cartridge connector to a vertical position. This allowed cartridges to be inserted from above. A modified ROM replaced the BASIC interpreter with a boot screen to inform the user to insert a cartridge. The C64GS was another commercial failure for Commodore, and it was never released outside of Europe. Basically it's a C64 with a modified ROM, a cartridge slot at the top and no keyboard. C64GS came with a cartridge containing Fiendish Freddy Big top of fun, Klax, International Soccer and Flimbo's Quest.