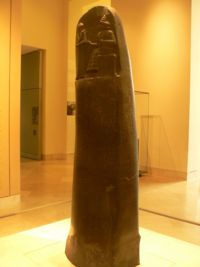 The Code of Hammurabi is a collection of laws promulgated by the Babylonian king Hammurabi in the early 18th century BCE. This legislative work was carved on several stelae, the most important of which is now at the Louvre Museum in Paris (the Hammurabi stela). It is believed that this stela was originally erected at Sippar, a town in the north of Babylon. Six hundred years after the reign of Hammurabi Sippar was pillaged by the elamite king Shutruk-Nahhunte, who placed the stela in its capital, Susa, were it was discovered in 1901.

The Hammurabi stela is 2.25 meters high and 70 centimeters wide; its weight lies at four tons. The top of the stela is occupied by a bas-relief portraying the meeting between the Babylonian sun god Shamash (associated with justice) and Hammurabi. Shamash is shown sitting on a throne, holding a scepter and a ring in his hand - the insignia of royal power - that he gives to Hammurabi; rays of light raise from his shoulders. Standing before the god with his right hand raised to his mouth (as a sign of respect) is Hammurabi, who wears a gown and a turban.

The stele was discovered broken in three pieces at Susa (now in western Iran) in 1901 by a French expedition headed by Jacques de Morgan. It was taken to the Louvre Museum were it was restored. Its accadian text was translated to French by the Dominican priest Jean-Vincent Scheil and published on 15 September 1902. The German and English versions of the text appeared the following year.