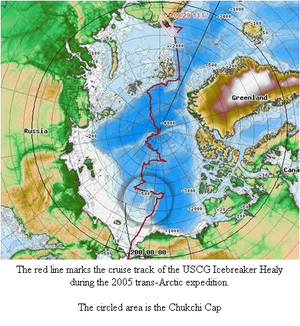 Voyage of the USCGC Healy and the Chukchi cap

The Chukchi Cap is a large undersea ridge in the Arctic Ocean.[1][2] The cap is normally ice-covered, year-round. The United States Coast Guard Cutter Healy has been sent on multiple missions to map the poorly explored ridge.

The cap lies roughly about 800 kilometres north of the Point Barrow, Alaska.[1][2] The area is notable because it is believed to be rich in natural resources, and it is a disputed water.