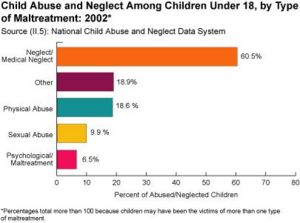 A bar graph on types of child abuse and neglect, by U.S. Department of Health and Human Services

Child abuse, literally, is the act of intentionally harming a child, or the results of that act. Child abuse is an inherent part of the long, unfortunate saga of maltreatment and neglect of children. Such abuse and neglect has probably always been a feature of childhood for some individuals in every human society. There are some social and psychological settings in families and institutions that make maltreatment of children more likely to happen, and there are characteristics of chilodren that increase their liklihood of being abused. Child abuse also has specific legal meanings, that, like all legal meanings, are locally defined.

Experts in child abuse consider that acts of ommission, as well as acts of commission, count as maltreatment of children. Physical abuse includes not only beating or other injury, but also, for example, failure to touch or hold a child. Certainly, in older children, there is a broad range of normal when it comes to adults having physical contact with children, but in neonates, infants and toddlers, lack of physical contact from care givers has clear and objective detrimental effects on health, and a young infant who is never held, for example, is actually less likely to survive. "Psychologic maltreatment of a child by a caregiver includes spurning, exploiting/corrupting, withholding emotional responsiveness, isolating, or terrorizing." (reference for quote:Charles F. Johnson:Chapter 35 – Abuse and Neglect of Children in Behrman: Nelson Textbook of Pediatrics, 17th ed. ISBN 1416024506) Psychological and physical abuse are often both features of the maltreatment of children and not used in isolation. Sexual child abuse

Epidemiology:Incidence and demographics of child abuse

How common is child abuse? Which children are abused, and how? These questions appear straightforward but cannot be answered without qualifications and explanations. The role of children in society is not constant in the different cultures of the world and has changed considerably within modern cultures over history. For example, an arranged marriage of a 13 year old girl to an adult man against her inclination is not only illegal in the United States, but the fostering of that relationship would be considered abusive. However, that was not the case in much of North America in earlier centuries and is not the case in some other countries today.

Child physical abuse, by definition, is injury inflicted upon a child due to physical aggression.[1] In order for a violent act to be considered child abuse, the injury does not need to be intended. In this regard, a parent or guardian who inflicts more injury on his/her child than what was intended is also guilty of physically abusing a child.[2] Child physical abuse is usually caused by a parent's inability to control his or her anger. Stress, loneliness, lack of emotional support, psychiatric disorders, and substance abuse can all be causes for child physical abuse. [3] Common warning signs of child physical abuse may include:

Emotional abuse can have many adverse psychological effects such as poor self esteem, destructive behavior, increased aggression, alcohol/drug abuse, and in severe cases - suicide.[5]

Child neglect is the most common form of child abuse and is reported most to child protective services. By definition, child neglect is a parent's "failure to provide needed age-appropriate care." [6] Child neglect can come in many different forms as the definition is very broad and encompasses many types of maltreatment. Such examples may include:

Abusive parents or caregivers can usually be broken up into three categories, based on the underlying factors driving the abuse.

Abusers who fall into this category do not abuse their children accidentally, as the inflicted injury is premeditated and is not a result of causing more harm than what was intended. Category A abusers usually suffer from psychopathic disorders but are not legally mentally ill; or in other words, they fully understand the consequences of their actions. Abusers in this category or not only chronic physical abusers, but also experts at manipulation. When confronted with suspicion of abuse, they will typically become overdramatic and make the questioning individual feel guilty for merely bringing up the possibility. They are also clever at fabricating plausible explanations for physical or emotional signs of abuse. Some reasons for an abuser's behavior may include gratification from inflicting pain or the need to dominate or have control over a child. Abusers in this category tend to have a Jekyll and Hyde personality, as their mood may dramatically change as soon as they are home alone with their child.

Abusers in this category do not typically inflict non-accidental injury on their child. These abusers usually suffer from high stress, depression, lack of family support, or may have a drug or alcohol related problem. As a result, most abuse is not premeditated and instead happens in a spur of the moment. Physical abuse is usually inflicted during the parent's breaking point, at which time the parent can no longer tolerate the child's requests and will usually inflict unintentional injury. However, the main difference between this group and group A lies in the parent's ability to recognize the abuse as dangerous to his/her child. Once the parent continuously inflicts abuse even when it is apparent that the abuse is seriously damaging the child, the abuser would then fall back into the category A group.

Category C consists of parents who mildly treat their children in an abusive way. In many societies, such individuals are not recognized as abusers; however by using the definition of ill treatment of a child, such individuals can technically be grouped into this category. Certain acts that may fall under the definition of ill treatment of a child may include slapping, excessively aggressive shouts, hurtful/demeaning remarks, and possibly even spanking. However, for many civilizations such as Western Europe and the United States and Canada, category C abusers are not considered to be abusive parents by general societal standards.[7]