From Citizendium
(Redirected from Cartesian coordinate)
Jump to: navigation, search

In plane analytical geometry, Cartesian coordinates are two real numbers specifying a point in a Euclidean plane (a 2-dimensional Euclidean point space, an affine space with distance). The coordinates are called after their originator Cartesius (the Latin name of René Descartes), who introduced them in 1637. In 3-dimensional analytical geometry, a point is given by three real numbers, also called Cartesian coordinates. 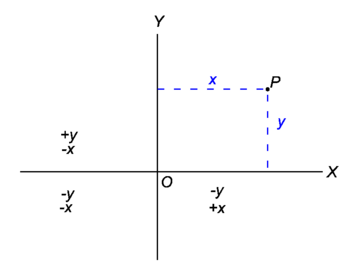 CC Image
Fig. 1. Two-dimensional Cartesian coordinates of point P. The signs of the coordinates in three of the four quadrants are indicated.

In two dimensions the position of a point P in a plane can be specified by its distance from two lines intersecting at right angles, called axes. For instance, in Figure 1 two lines intersect each other at right angles in the point O, the origin. One axis is the line O–X, the other O–Y, and any point in the plane can be denoted by two numbers giving its perpendicular distances from O–X and from O–Y.

One can introduce oblique axes and the position of a point may be defined in the same way: by its distance along lines parallel to the x and y axes. Sometimes these oblique coordinates also called "Cartesian", but more often the name is restricted to coordinates related to orthogonal axes. 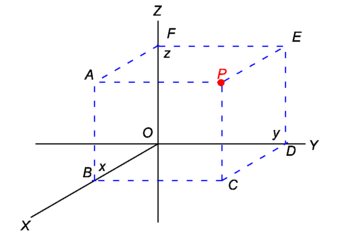 In Figure 2 three (black) lines, labeled X, Y, Z, are shown in three-dimensional Euclidean space. They intersect in a point O, again called the origin. The lines are the x-, y-, and z-axis. As in the two-dimensional case, the axes consist of two half-lines: a positive and a negative part of the axis. The frame is right handed, if we rotate the positive x-axis to the positive y-axis the rotation direction (by the corkscrew rule) is the direction of the positive z-axis. In older literature and some special applications one may find a left-handed Cartesian set of axes, in which the x- and the y-axis are interchanged (or, equivalently, the z-axis points downward).

Although orthogonal axes are frequently introduced in Euclidean spaces of dimension n > 3, it is unusual to refer to these coordinates as "Cartesian", more commonly they are called coordinates with respect to an orthogonal set of axes (briefly orthogonal, or rectangular, coordinates).