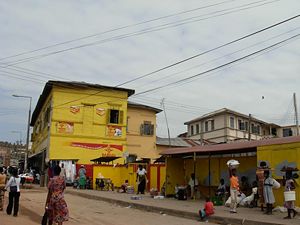 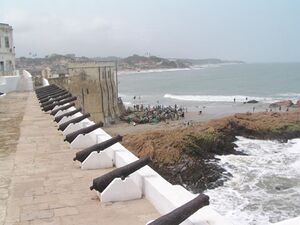 Cape Coast is the capital of the Central Region in Ghana. It has 143,044 inhabitants, most of them belonging to the Fante people.

Pupils and students from all over the country come to Cape Coast because of the many prestigious schools and the university.

In the twelfth century, a migration wave started from various places towards the West African coast. The first people that settled in the area of today’s Cape Coast were the Efutu, followed by the Fante. A market town grew up.

In the 16th century, the first English traders arrived. Around 1600, the Portuguese built a castle, which was occupied by the Dutch in 1637. From 1664 until 1877, Cape Coast was the capital of the British colony Gold Coast.

The town was one of the centres of the Transatlantic Slave Trade. Indigenous slave traders collected the slaves in the north of the country and brought them to the coast. The slaves were kept in the dungeons of the castle, until there were enough to fill a ship.

The castle was the seat of the British governor for a long time. In the courtyard, there are graves of people who played an important role in the history of the Gold Coast:

Today, the castle is a museum about the history of the slave trade.