Canadian Security and Intelligence Service is a civilian security intelligence organization of the Canadian Government responsible for conducting counterintelligence, counterterrorism and counterproliferation against any potential threats against Canadian interests, as well as intelligence analysis. CSIS is also responsible for and security screening of government officials. Originally, CSIS fell under the direction of the Solicitor General, however, in a recent reorganization in now falls under the Minister of Public Safety Canada. [1] The agency co-operates with various allies including Australia, Great Britain, the United States, New Zealand, and her NATO allies.

Intelligence Agencies in Canada Before CSIS

The first Canadian intelligence collection agency was set-up by Prime Minister Sir John A. MacDonald in 1864. This force was called the Western Frontier Constabulary and was responsible for monitoring the situation along the borders between Upper Canada (Ontario) and the United States. For Lower Canada (Quebec) the Montreal Water Police was established. Both organizations reported to the Prime Minister. [2]

The Frontier Constabulary's first mission was to monitor the Canadian/U.S. border during the American Civil War. After the war, its focus turned to the Fenians. The Fenians were Irish nationalists who were opposed to Britain and carried out several invasions of Canada in an attempt to overthrow British rule.

In 1868 the Western Frontier Constabulary and Montreal Water Police were amalgamated into a new force called the Dominion Police Force.

The Dominion Police Force continued its mission until 1920 when it too was amalgamated with the Royal Northwest Mounted Police to form a new organization, the Royal Canadian Mounted Police. During this time the RCMP's security and intelligence function was fairly small-scale and it wasn't until the outbreak of World War II and the subsequent Cold War that saw an expansion of the RCMP's security/intelligence operations. [3]

In the early '70's the RCMP-Security Service was implicated in various activities "not authorized or provided for by law." To look into these allegations, a Royal Commission [5] was established in 1977. This commission was called "The Commission of Inquiry Concerning Certain Activities of the Royal Canadian Mounted Police[6]." and was headed by Mr. Justice D.C. McDonald and was more commonly known as the "McDonald Commission." Over a four year period the McDonald Commission investigated the Security Service and found that the service had been involved in numerous illegal activities. The main recommendation of the Commission was that the RCMP-Security Service should lose its security intelligence function and that a new civilian intelligence agency be formed to replace it. [7]

In May 1983, the federal government acting on the commissions report tabled Bill C-157, An Act to Establish the Canadian Security Intelligence Service (CSIS). Because of concerns of possible threats to civil liberties, a Senate special commission was established to hold public hearings into Bill C-157. After the Senate committee made its report, Bill C-157 was allowed to die. Early in 1984, a second bill, Bill C-9 was introduced and came into force in June 1984 and became the CSIS Act.[8] which in turn led to the creation on 16 July 1984 of the Canadian Security Intelligence Service.

The CSIS Act defines the duties and responsibilities of CSIS and is divided in to three parts. Part I among other things, defines the duties and responsibilities of its director; who the agency can collect information on; what kind of information it can collect and who it can liaise with (including foreign governments). Part I also deals with salaries, pension benefits and discipline and arbitration issues relating to CSIS employees.

Part II sets out the judicial controls of the agency including the issuance of warrants.

The main role of CSIS is to investigate and collect information and intelligence pertaining to any activities that could be perceived as a threat to Canada or Canadian interests. These threats do not necessary have to take place in Canada and can include threats against Canadian allies. This also covers any activity in support of these threats. According to the CSIS Act threats to the security of Canada are defined as:

(b) foreign influenced activities within or relating to Canada that are detrimental to the interests of Canada and are clandestine or deceptive or involve a threat to any person,

(c) activities within or relating to Canada directed toward or in support of the threat or use of acts of serious violence against persons or property for the purpose of achieving a political, religious or ideological objective within Canada or a foreign state, and

(d) activities directed toward undermining by covert unlawful acts, or directed toward or intended ultimately to lead to the destruction or overthrow by violence of, the constitutionally established system of government in Canada,

but does not include lawful advocacy, protest or dissent, unless carried on in conjunction with any of the activities referred to in paragraphs (a) to (d). [10]

As part the Government Security Process, CSIS created the Government Screening Unit that is required to perform security screening (i.e. background checks) on any federal employee, Canadian Forces member or government contractor who in the performance of their duties require access to classified material or sensitive government facilities and therefore require a security clearance. This pertains to all federal departments, except for the RCMP which screens its own personnel. These security checks are conducted to ensure that an individual can be trusted while in possession of classified material. [11] As part of this screening process investigators may interview the individuals former employees, friends, or neighbours. Financial and/or police background checks may also be conducted. While conducting these checks, investigators are looking for any activity that may open the individual to blackmail or that the individual belongs to an illegal organization that poses a threat to Canadian interests.

This program is intended to individuals who are considered to be undesirables from entering or receiving status as defined by relevant sections of the Immigration and Refugee Protection Act (IRPA) and the Citizenship Act (CA). Through this program CSIS is able to provide advice to both Citizen and Immigration Canada (CIC) and the Canada Border Services Agency (CBSA). This has four main components:

(a) the screening of visitors from countries of terrorist and espionage concern;

(b) the screening of refugee claimants in Canada;

(c) the screening of applicants for permanent residence from within Canada and abroad; and

(d) the screening of applicants for Canadian citizenship.[12]

The Canadian government has agreements within foreign governments that allows CSIS to provide security assessments to foreign governments, agencies (CIA, FBI, MI-6), and international organizations (UN, NATO) on Canadian residents who are planning to move another country or may require access to classified material while overseas.[13]

Initially, CSIS was organized into four different directorates based on their functions, Counter-Terrorism, Counter-Intelligence, Counter-Proliferation and Government Screening. After 9/11 it was realized that in the changed world this organization was no longer functional. Therefore, in late 2005 and into 2006 it was decided that an reorganization was necessary. This resulted in the organization that is shown in the falling diagrams. (For simplicity the CSIS organization is shown in two separate diagrams). 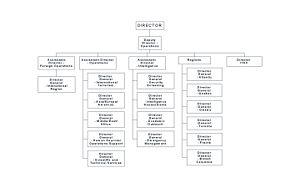 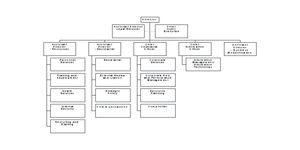 CSIS is headed by a director who is appointed by the Prime Minister for a period of five years, with the possibility of reappointment for a second five year term. The Director is responsible for the operation of CSIS and its personnel. Originally, the Director reported the Solicitor-General of Canada, however, after 9/11 there was a reorganization in the Canadian intelligence/security community and now CSIS falls under the authority of the Minister of Public Safety. The Director will every 12 months (unless otherwise specified) provide a report to the Minister of Public Safety of CSIS' operations during that time period.

The Inspector General (IG) is appointed by Governor in Council and reports to the Deputy Solicitor General. His/her responsibilities are:

(a) To monitor the compliance by the Service with its operational policies;

(b) To review the operational activities of the Service; and

(c) Provide a report to the Director on any activities that the IG believes are not authorized by the Act or contravenes the Act or involves an "unreasonable or unnecessary exercise by the Service of any of its powers."

If the IG believes that CSIS has engaged in any unauthorized activities or unreasonable/unnecessary activities then a report ("certificate") shall be sent to the Solicitor-General who would in-turn forward it to the Security Intelligence Review Committee (SIRC).

Until recently, it conducts no clandestine intelligence collection although it has access to signals intelligence produced by the Communications Security Establishment and through close relationships with allies. A 2007 statement, however, says "the Service may engage in covert operational activities outside of Canada. These activities are varied in nature, but all are conducted in accordance with the CSIS Act, CSIS policy and Ministerial Direction, and with appropriate approvals in place."[14]

While it produces reports at all levels of classified information, it probably publishes more of its analytical output than any world intelligence agency; see Canadian Security Intelligence Service/External Links.