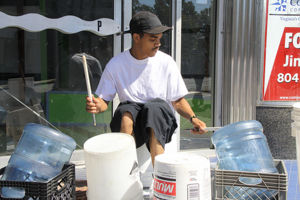 The exact origins of bucket drumming are unclear. Street musicians have been around for thousands of years, and have always selected materials and made instruments from what was available in their immediate surroundings.[1] Starting around the 1980's, plastic buckets were an object that was available in large amounts. Additionally, plastic buckets can easily be setup in different drumset-like patterns, and are relatively easy to transport. Bucket drumming appeared to first take hold in New York City in the 1980's, as you would occasionally find drummers performing informally along city streets and in subway tunnels. Larry Wright, a drummer from the Bronx, is widely considered to be the first “major drummer” to use plastic buckets instead of a standard drumset.[2]

In addition to New York City, you can fund bucket drummers in many metropolitan areas around America, including Chicago, Portland, and Seattle. Bucket drumming is often taken up by poor people as a means of survival, as bucket drummers usually have “tip” buckets or jars where they accept donations. However, this is not always the case. While it remains a mostly informal and un-commercialised genre of music, there are some well-known and prominent bucket drumming artists, including the Chicago Bucket Boys, and Funk Plastic from Seattle.