Brucella canis are Gram-negative Proteobacteria within the Brucellacae family. B. canis is a facultative intracellular pathogen that can survive well outside a host, but prefer to reproduce within the host. When first found B. canis was one of many species of Brucella, but in 1977 it was determined that the only species is B. melitensis and the others are just at subtypes of the species. The subtypes only exist for their differences in the animal host it prefers and phenotypic appearance. B. canis is one of the subtypes with the preference for dogs as its host (“Brucella,” 2009).[1]

Brucella species was first discovered by a British doctor named Davis Bruce, hence the name Brucella. In the 1950’s in Malta an unknown disease known as Malta fever caused British soldiers to become ill. In 1887 Bruce determined that the causal agent of the disease was from a Brucella bacterium found in milk from infected goats (“Brucella,” 2009).[2] B. canis first gained recognition in 1966 in the United States as the causal agent of massive abortions that occurred amongst female beagles. The bacterium was then determined to be the causal agent of the infectious disease brucellosis in female and male dogs, which causes abortions and infertility (“Canine Brucellosis,” 2000).[3] In the United States Brucella was the first microorganism developed into a weapon to be used by the military (“Brucellosis,” 1999).[4] 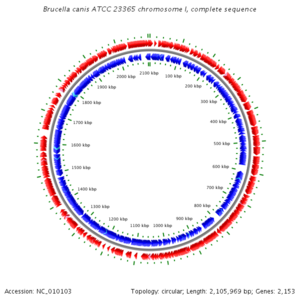 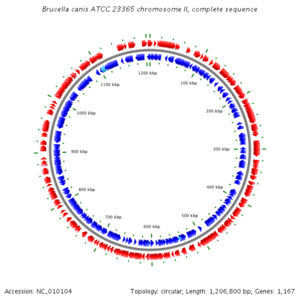 B. canis are small, rough, rod shaped, and non motile Gram-negative bacteria. Often it is described as “coccobacillai-shaped” because it looks like short rods rather than long rods. (“Brucellosis,” 1999).[6] B. canis growth is inhibited by a 10% concentration of carbon dioxide (“Brucella,” 2009).

B. canis are found all over the world, but more specifically areas that have poor sanitation and lack good public health safety to support animal infection or lack economic funds to support public health. Some areas where B. canis has been reported are the southern states within the United States, Canada, South and Central America, Mexico, Tunisia, Nigeria, Madagascar, Malaysia, India, Korea, Japan, and China. Australia and New Zealand may be the only areas of the world that do not contain the bacterium (“Canine Brucellosis,” 2000).[7]

B. canis can penetrate mucous membranes within the oral cavity and vagina of dogs. The bacterium is found living within the uterine tissue and secretions of female dogs and is shed for months after an abortion. The bacteria found in the semen, testicles, and urine of male dogs and are shed for years, even past castration. B. canis can live within a dog for years before it eliminates the infection. B. canis is transmitted from dog to dog sexually through vaginal and semen secretions. The bacteria can be released from infected dogs by secretions that exit the mouth and nose, and through scars or cuts. Although, dogs are the common host, B. canis is zoonotic, enabling bacteria from an infected dog to spread to humans by direct contact between the infected and uninfected hosts. The bacterium is rare and mild in humans, but the humans most susceptible to the bacterium are those that work with the infected animals or the bacterium such as vets and lab workers (Canine Brucellosis,” 2000).[8]

B. canis can be diagnosed in an infected dog by using serologic tests and blood cultures. Although useful, serological tests are not the best way to diagnose B. canis because the antigens they test for cross-react with antibodies of Gram-negative bacteria that are not pathogenic. Blood cultures can be used to confirm a positive serologic test and are more convincing because the presence of B. canis indicates an infection has occurred. The bacterium can be found in the blood of an infected dog 2-4 weeks after infection and survives for 5 or more years (“Brucella canis,” n.d.).

Among humans, the mortality rate of B. canis in humans is very low and deaths only occur if a person gets brucella endocarditis or meningitis (“Canine Brucellosis,” n.d.).[11] Since the 1960’s there has been about 30 cases reported worldwide. Unfortunately, there is still no vaccine to prevent brucellosis. All breeding dogs are tested year round to prevent the spread of B. canis. Infected dogs are isolated immediately from other dogs and not allowed to breed even after it may be cured. Humans can protect themselves by using gloves and cleaning by using disinfectants when handling B. canis or infected dogs (“Brucella canis,” n.d.). B. canis can withstand various environmental conditions, ranging from very high temperatures and lack of sunlight, and can survive well in water, feces, urine, and clothing for several months with out need of an intracellular host, making prevention methods difficult (“Brucella canis,” n.d.).

A whole genome based phylogeny has been created from 10 genomes of Brucella species using the closely related bacterium Ochrobactrum, which is a soil bacterium and human pathogen (Foster et al., 2009).[12] The purpose was to determine if the phylogeny design reflects the phylogeny of the preferred host. On each chromosome of the Brucella species there are distinct SARs or shared anomalous regions that were produced from horizontal gene transfer and are unique for Brucella, but are not found in Ochrobactrum. This suggested that the Brucella phylogeny occurred independent of its intracellular life cycle. The SARs contain many genes that the bacterium needs to survive and if mutations occur on any the SARs genes the ability for the Brucella to survive within its host is reduced (Wattam et al., 2009).[13]

In order to perform serologic tests of B. canis, a less muciod M- strain of B. canis is used rather than the wild type because the wild type aggregates even when the specific antibodies are absent. When the M- strain is injected into infected dogs, the mutated strain exhibited reduced virulence. This led researchers to wonder if the M- strain is avirulent in humans as well. According to a case reported by the CDC, a 35 year old male was working with B. canis M- strain in a lab without using proper safety precautions. The man was not wearing any gloves and used his mouth to pipette. The man did not have contact with any dogs, but was showing symptoms of brucellosis and when tested he was found positive for B. canis. The man had been infected by the M- strain. The man went through 4 years of antibiotic therapy before he was cured. It was shown that the M- strain is helpful at reducing infection in dogs, but is not helpful in humans because it causes the same symptoms as wild type B. canis (Wallach et al., 2004).[14]

Although, B. canis is the significant cause of brucellosis in dogs it is rare in humans. According to a case report a 49 year old man was hospitalized because he was experiencing fever, weight loss, and heart murmur. The man was examined by a doctor and diagnosed with endocarditis. The doctor could not determine what the cause of his heart problem was and performed heart valve removal in order to save the man’s life. After surgery a serologic test showed that B. canis was the causal agent of the heart complications. The man stated that he had not been in contact with any dogs or labs, indicating an atypical source of the infection. The man was then given antibiotics and was cured of the infection after 3 years of antibiotic therapy. This report is still undergoing further analysis because of how rare it is for humans to get brucella endocarditis. Unlike dogs, humans infected with B. canis get cured and can function normally (Ying, Wang, Nguyen, & Jahre, 1999).[15]