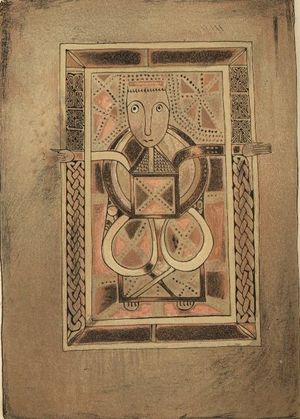 The Book of Deer (Cambridge University Library, MS. II.6.32) is a 10th century Gospel Book. It is most famous for containing the earliest surviving use of Gaelic in Scotland. It may be the oldest surviving manuscript produced in Scotland.

The Latin text contains portions of the Gospels of Matthew, Mark, a portion of an Office for the Visitation of the Sick, a portion of the Gospel of Luke, the complete text of the Gospel of John, and the Apostles Creed. It ends with a colophon in Old Irish. The Gospel texts are based on the Vulgate but contain some peculiarities unique to Irish Gospel Books. The texts are written in an Irish minuscule text, apparently by a single scribe. Although the text and the script of the manuscript place it squarely in the tradition of the Irish Pocket Gospel, scholars have argued that the manuscript was produced in Scotland. 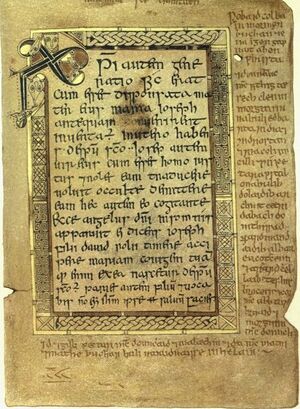 There are seven Gaelic texts written in blank spaces surrounding the main items. These marginalia include an account of the founding of the Monastery at Deer by St. Columba and St. Drostan, records of five land grants to the monastery, and a record of an immunity from payment of certain dues granted to the monastery. There is also a copy of a Latin deed granted to the monastery by David I protecting the monastery from "all lay service and improper exaction." The Gaelic texts were written by as many five different hands. These represent the earliest surviving use of Gaelic in Scotland and are important for the light they shed on the development of Gaelic in Scotland.

The manuscript is illuminated. It has a complete and well thought out illumination program. There are four full page Evangelist portraits. Each portrait faces a page of text surrounded by an border of interlace. Each of these text pages has a large initial decorated initial. The book opens with a full page miniature of the four evangelists and closes with two facing pages each also with a full page miniature of the four evangelists. The final text of John ends with a half page miniature of two men. There are small decorated initial letters throughout the text. There are also ten pages, all in the final half of the book, with marginal drawings of men, animals, or simple doodles.

The manuscript derives its name from the columban Monastery of Deer, mentioned in the Gaelic texts and the Latin Charter of David I. Unfortunately, the foundation at Deer has left no other trace of its existence, although a Cistercian monastery, founded nearby in 1219, owned some of the lands mentioned in the Gaelic texts. The manuscript came to Cambridge University Library in 1715 when the library of John Moore, Bishop of Norwich, was purchased by George I and presented to the University. It is not known how the manuscript came to be in the library of Bishop Moore.