At some point in time, human ancestors began to see bones as more than just unsavory remains. They began to see them as tools to perform a specific purpose. The earliest use of bone tools (modification and use of bone by hominins) is a matter of considerable debate. The implications of this debate include the assessment of modern human behaviour and the criteria for identifying bone tools that are used and modified by hominins.[1] Bone tools have traditionally been associated with modern human behaviour and the emergence of anatomically modern humans. However, findings at several Lower and Middle Palaeolithic sites have suggested instead that these hominins had the mental abilities to manufacture, use and modify bone tools. In the search for the early bone tools as indicators of hominin cognitive abilities, it is necessary to develop an interdisciplinary method for correctly identifying used and modified bone implements.

The general consensus in the 1990s was that bone tools were not made during the African Middle Stone Age (MSA). This interpretation was based on the assumption that MSA hominins did not have the cognitive ability to produce complex bone tool technologies. Evidence for this came from the rarity of bone tools in the African MSA deposits. Bone tools are commonly used to assess modern behaviour. Subsequently the relative abundance of bone tools and the occurrence of anatomical modern humans in Later Stone Age (LSA) deposits, some 40,000 to 30,000 years ago, further supported the claim that MSA hominins did not have the mental capabilities to manufacture bone tools.[2] However, recent work in Africa and Europe has suggested that MSA hominins did have the mental ability to manufacture, use, and modify bone tools for various tasks. In addition, Neanderthals are known to have manufactured bone tools during the Middle Palaeolithic, thereby refuting the assumption the bone tools are particular to anatomical modern humans of the LSA of Africa and the Upper Palaeolithic of Europe. In Africa, the first strong evidence for MSA bone tool production occurs in the form of barbed and unbarbed points from the Katanda sites in the Democratic Republic of Congo.[2] Another large assemblage of MSA bone tools has been recovered from Blombos Cave, South Africa. The 28 bone tools, including an MSA bone point, from Blombos Cave demonstrate that the MSA hominins had the cognitive ability to perceive bone as a raw material as well as the ability to utilize manufacturing techniques to produce various shaped bone tools for various function.[2] The key issue of the debate regarding the earliest use of bone tools is whether modern human behaviour emerged with the appearance of anatomical modern humans as a behavioural 'package', or whether MSA hominins can be regarded as behaviourally modern in light of the new evidence of bone tools from MSA sites in Africa and Europe.[3]

Bone tool assessment and the Pseudo-tools

Several taphonomic studies and microwear analyses indicate that a number of natural processes can produce pseudo-tools which appear to be human-made.[1] 'Natural' modifications to bones, other than hominin-made, include gnawing or digestion by carnivores, rodents or herbivores; bone breakage for marrow extraction by carnivores; trampling; root etching; and weathering.[1] In order to distinguish between pseudo-tools and true tools it is necessary to utilize several methods of analysis. These methods include replication and experimental use of bone tools; scanning electron microscope (SEM); microwear analysis for quantification of wear patterns and distributions on the purported bone tools; and modern analogues to provide comparative data for assessing bone tool use. Studies on the use of bone tools consistently use these taphonomic approaches in combination in order to distinguish true bone tools from pseudo-tools. 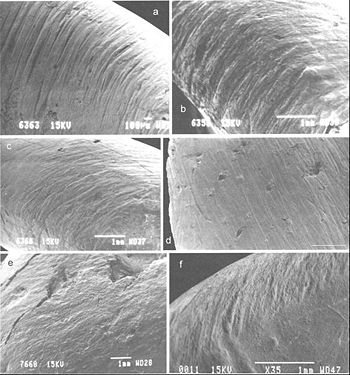 The earliest evidence for modification and use of bone points comes from the South African sites of Swartkrans, Sterkfontein, and Drimolen. These sites date to 1.8 and 1.0 Ma. The bone tools from Swartkrans were suggested to have been used for digging up tubers and working skins,[4] and taphonomic analyses supported the hypothesis. Experimental research compared the modification done to screwdrivers and modern bones used for digging up tubers.[4] Scanning electron microscope analysis on the modifications on the experimental bones were interpreted as demonstrating similarities with the wear patterns on the Swartkrans bone tools.

Analysis on wear patterns suggest that these tools were used to dig into termite mounds.[1] Analysis of breakage patterns indicates that early hominins selected weathered bone fragments and horn cores for digging.[1] The evidence for this interpretation came from experimental research comparing the modifications and wear patterns on the Swartkrans bone tools to experimentally-produced modifications and wear patterns on bone tools used for a variety tasks including termite foraging. Quantification of the wear patterns and their distribution proved that they were comparable between the Swartkrans bone tools and the experimental bone tools used for termite foraging. These approaches therefore provided evidence to support the interpretation that the bone tools were used by hominins at Swartkrans for digging into termite mounds.[1]

In addition, metric analysis on the Swartkrans assemblage demonstrates that longer, wider and more robust bone fragments were selected by hominins for bone tool manufacture.[1] This supports the taphonomic analysis in distinguishing bone tools and pseudo-tools.[1] Scanning electron microscope analysis further suggests that the wear pattern and distribution on the Swartkrans bone tools evidence traces of grinding on used bone tools of the Swartkrans assemblage.[1] Grinding, a technique particular to the bone tool, suggests that hominins used intentional shaping for the production of the bone tool.[1] This suggests that hominins had the cognitive ability to modify a bone implement with the intention of improving it.[1] 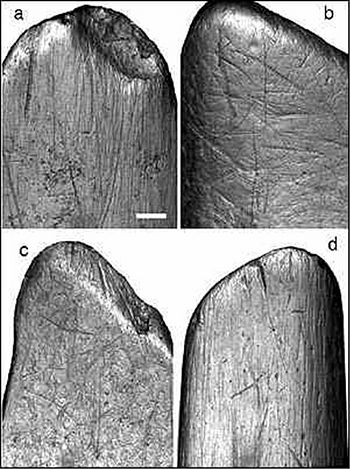 Who used the bone tools?

The largest assemblage of bone tools occurs in the Middle Stone Age levels of Blombos Cave, South Africa. At this site 28 bone tools were recovered from the MSA levels. Analysis of the assemblage indicate that the MSA bone tool production followed a sequence of manufacture beginning with blank production, the use of various shaping techniques, and finally finishing the artifacts to produce awls or projectile points.[2] The Blombos assemblage comprises mostly of awls as well as three points that were probably projectile points made for hafting.[2] The variety of bone tools displaying different methods of shaping indicates that hominins had the mental ability to utilized different manufacturing techniques, such as grinding and scraping, to produce a variety of bone tools for different functions, such as awls and points.[1]

Mary Leakey (1971) reported 125 modified bones and teeth from Olduvai Beds I and II. These bone tools were interpreted to have been modified by intentional flaking.[5] According to Shipman (1984) the Olduvai bone tools collection can be described as consisting of anvils and tools for heavy duty activities such as butchering or digging.[6] The purported bone tool assemblage consists of fresh bone shaft fragments and epiphyseal pieces from large and very large mammals and bearing five or more flake scars.[1] These flaked bone tools are correctly interpreted as used and modified by hominins.

Who were the tool makers?

According to d’Errico & Backwell (2005) the bone tools only occur in Bed II thereby suggesting that the modification of bone fragments by flaking is not a feature of the Oldowan, but Developed Oldowan or Early Acheulean.[1] In addition, the flaked bone tools appear in the same beds as Homo erectus <middle and upper Bed II> thereby suggesting that Homo erectus was at least partly responsible for the Olduvai bone tools.[1]

Used and modified bone points that function as awls or points have been found to occur at Lower and Middle Palaeolithic sites from Europe. Three Lower Palaeolithic sites in Italy, have yielded bone tool bifaces made by flaking the long bones of Elephas antiquus (elephant). Other sites have yielded bone fragments used to retouch stone tools. Regardless of extensive studies done in order to distinguishing percussion marks and carnivore notches, the identification of bone tools shaped by flaking remains a matter of debate.[1] Other sites such as Arcy-sur-Cure and Quincay in France which date to between 40,000 and 35,000 years ago, have yielded evidence of complex bone tool technology including personal ornaments, shaped and decorated awls, and many bone tubes.

Several perforated animal phalanges from Middle Palaeolithic sites have been interpreted as whistles or Neanderthal bone flutes.[7] A Neanderthal 'flute' from Divje Babe Cave in Slovenia found in Middle Palaeolithic layers of the cave.[8] It was described as the earliest evidence of a musical instrument, but it is a controversial musical instrument and has been found to be carnivore <bear> modified rather than hominin modified.[1]

Who were the tool makers?

Shaped bone tools were also reported several late Neanderthal sites in Europe. Recent work has suggested the Neanderthals did work bone.[9] d’Errico et al <2003> have demonstrated that Neanderthals were responsible for the Chatelperronian bone awls and other bone tools, not their Homo sapiens successors. This provides further evidence that bone working as a modern behaviour was not exclusively associated with anatomical modern humans.

The Functional uses of bone tools

Based on bone tool research from various sites in Africa and Europe from both the Middle Palaeolithic (MSA in Africa) and Upper Palaeolithic (LSA in Africa), the modification of bone tools appears to have three functional interests: cutting edges, points, and percussive surfaces.[10] Cutting edges were probably used for processing meat and butchering while percussive surfaces were probably used for breaking bones for marrow extraction.[10] Bone points were used for digging activities such as digging for tubers and digging into termite mounds and only used later used for working skins and hunting, probably in the LSA of Africa and the Upper Palaeolithic of Europe.[4]

Determining the earliest instances of modification and use of bone as tools by hominins is still a matter of considerable debate. The implications of this debate include the assessment and origin of modern human behaviour as well as the criteria for identifying bone tools that are used and modified by hominins. The co-occurrence of modern behavioural aspects and bone tools in LSA deposits have led to the use of bone tools as criteria for assessing modern human behaviour. However, the occurrence of bone tools in an increasing number of MSA sites in Africa have suggested that MSA hominins possessed the cognitive ability to perceive, manufacture, modify, and use bone tools for a variety of functions. Critical to the study of the earliest bone tools are the criteria for distinguishing been true bone tools and pseudo-tools. These criteria include the replication and experimental use of bone tools; scanning electron microscope analysis, quantification of wear patterns and distribution; and the use of modern analogues for comparative studies. Therefore, in the search for the early bone tools as indicators of hominin cognitive abilities it is necessary to develop an interdisciplinary method for correctly identifying used and modified bone implements.