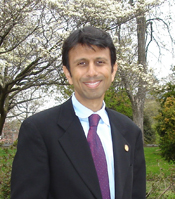 Piyush "Bobby" Jindal (1971- ) is an United States politician and the current governor of the state of Louisiana. He is a member of the Republican Party, and is the first non-white governor of Louisiana since Reconstruction. He was elected in 2007 and inaugurated in 2008, succeeding Democrat Kathleen Blanco. Prior to his governorship, he served in the U.S. House of Representatives. He was a Rhodes Scholar.

Jindal is very conservative, as he strongly opposes abortion and embryonic stem cell research, and supported gun rights, a stronger military force and stricter national security measures in response of threats of terrorism. He voted against the implementation of CAFTA, the free trade agreement between U.S. and countries in Central America.