A black body absorbs and then re-emits all incident EM radiation. By definition it has an absorptivity and emissivity of 1, and a transmissivity and reflectivity of 0. The Planck black body equation describes the spectral exitance of an ideal black body. The study of black-body radiation was an integral step in the formulation of quantum mechanics.

Note that the input

term from the numerator gives the blackbody emission in terms of radiance, with units

where "sr" is steradians.

All other units are the same as for the Wavelength formulation. Again, dropping the

from the numerator gives the result in radiance rather than irradiance.

Properties of the Planck Equation

Taking the first derivative of the Planck's law wavelength equation leads to the wavelength with maximum exitance as a function of temperature. This is known as Wien's displacement law:

The ratio of the actual exitance of a surface to that of an ideal blackbody is the surface's emissivity, which is always less than or equal to 1. 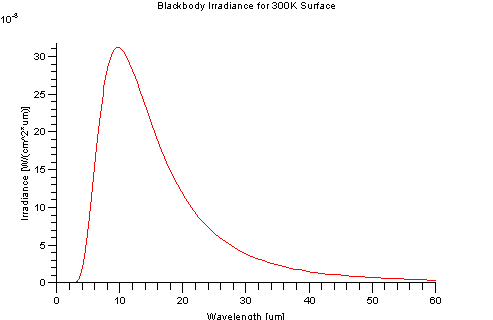 An ideal blackbody at 300K (27 Celsius) has a peak emission at 9.66 microns. It has virtually no self-emission below 2.5 microns, hence self-emission is typically associated with the "thermal" regions of the EM spectrum. However, the Sun can be characterized as a 5900K blackbody and has a peak emission at around 0.49 microns, which is in the visible region of the electromagnetic spectrum.

The Planck equation has a single maximum. The wavelength with peak exitance becomes shorter as temperature increases. The total exitance increases with temperature.