The discovery around 1975 of methods to directly change DNA - usually called genetic engineering, and of ways to decode DNA sequences - usually referred to as DNA sequencing - ushered in a revolution in the biological sciences which is continuing, seemingly unabated, into the twenty-first century.

Rapid scientific progress fostered by these discoveries after 1975 quickly extended to plant genetics and plant breeding. Many new plant breeding techniques were invented, older methods were refined by the new experimental tools, and further powerful methods (such as the polymerase chain reaction (PCR) and automated DNA sequencing) were generated during the spectacular expansion of biotechnology after 1975.

For achieving useful practical outcomes in plant breeding, direct manipulation of DNA is complementary to the strengths of classical plant breeding, and the newer biotechnology methods do not displace classical plant breeding. But genetic engineering and other molecular biology tools allowed the creation of several new methods such as DNA fingerprinting (DNA markers) that accelerate the relatively slow process of classical breeding. Improvements in genetic technology led to DNA sequencing and gene sequence analysis applied to whole genomes, a scientific field now called genomics, eventually becoming both possible and practical, and this, in turn, generated massive quantities of useful new knowledge that greatly assists scientific plant breeding.

Genetic engineering is used to generate transgenic plants, and also for the relatively new field of deliberate RNA based silencing of plant genes (alternately referred to as RNA interference, cisgenics, or RNAi)[1].

Genetic modification of plants by DNA manipulation, usually just called Genetic Modification or "GM", is achieved by adding a specific gene or genes to a plant, or by silencing the expression of a gene with RNAi, to produce a desirable phenotype. The plants resulting from adding a new gene are often referred to as transgenic plants. It should be remembered that wide crosses (inter species crosses) used in classical breeding also create transgenic plants, and that gene silencing and formation of transgenic plants also occurs during natural evolution.

Plants in which RNAi is used to silence genes are now starting to be called cisgenic plants.

To genetically modify a plant, a genetic construct must be designed so that the gene to be added or knocked-out will be expressed by the plant. To do this, a promoter to drive transcription and a termination sequence to stop transcription of the new gene, and the gene of genes of interest must be introduced to the plant. A marker for the selection of transformed plants is also included. In the laboratory, antibiotic resistance is a commonly used marker: plants that have been successfully transformed will grow on media containing antibiotics; plants that have not been transformed will die. herbicide resistance is also often used as a marker. In some instances markers for selection are removed by backcrossing with the parent plant prior to commercial release.

The construct can be inserted in the plant genome by genetic recombination using the bacteria Agrobacterium tumefaciens or A. rhizogenes, or by direct methods like protoplast transformation, the gene gun or microinjection. Using plant viruses to insert genetic constructs into plants is also a possibility, but the technique is limited by the host range of the virus. For example, Cauliflower mosaic virus (CaMV) only infects cauliflower and related species. Another limitation of viral vectors is that the virus is not usually passed on the progeny, so every plant has to be inoculated. Tobacco mosaic virus has been used to express proteins in tobacco and related plants.

Genetic modification via direct DNA manipulation can potentially produce a plant with the desired trait or traits faster than classical breeding because the majority of the plant's genome is not altered . 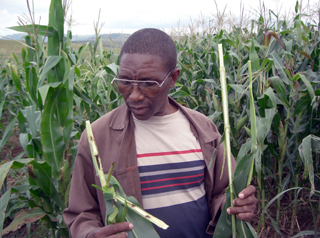 The majority of commercially released transgenic plants, are currently limited to plants that have introduced resistance to insect pests and herbicides. Insect resistance is achieved through incorporation of a gene from Bacillus thuringiensis (Bt) that encodes a protein that is toxic to some insects. For example, the cotton bollworm, a common cotton pest, feeds on Bt cotton it will ingest the toxin and die. Herbicides usually work by binding to certain plant enzymes and inhibiting their action. The enzymes that the herbicide inhibits are known as the herbicides target site. Herbicide resistance can be engineered into crops by expressing a version of target site protein that is not inhibited by the herbicide, or by introducing genes that encode enymes that convert herbicides to inactive forms once they enter the plant that are unable to bind to the target site. Such methods used to produce glyphosate resistant crop plants (See glyphosate), and tolerance to other herbicides.

DNA markers are useful for backcrossing major genes (such as those conferring pest-tolerance) into proven high performing cultivars [3] . They can aid selection for traits that are not easily assayed in individual plants. Introduction of unwanted genes, genetically linked to the desired trait (genetic hitchhiking [4]) can be minimized, and the time needed to obtain a plant with a high percentage ( 98 to 99 percent) of the original desirable genetic background can be substantially reduced. [5]. Such additional genes are a significant issue when classical breeding methods used to transfer major traits into a major crop variety.

A good example illustrating several of advantages of marker assisted backcrossing was reported by Chinese scientists in 2000 working with rice. They used marker assisted breeding improving bacterial blight resistance of rice with the Xa21 gene. For this fine achievement, Chen, Lin, Xu and Zhang used RFLP DNA markers to assist their breeding [6].

The scope of plant breeding continues to expand in the twenty first century. Genomics, marker-assisted breeding, and RNA interference ((RNAi), siRNA, cisgenics) are increasingly effective in accelerating commercial breeding, identifying the functions of physiologically relevant genes, and in allowing crop traits to be modified.

A major area in which biotechnology is being applied to plant breeding is improve nutritional quality by increasing vitamin (e.g. pro-vitamin A in Golden Rice), essential fatty acids (such as Omega 3 fatty acids in a variety of organisms) and protein content.

Recent work with identifying wheat genes that infuence protein content [7] illustrates how RNAi and marker assisted breeding come together in providing faster methods for crop improvement and potentially, better nutitional quality. (It does have to be borne in mind that improved protein quality and crop yield represent a trade-off).

Both nutrition and environmental impacts are addressed in recent work to breed and grow wheat and barley with low phytate content. Such grains not only free up zinc, manganese and iron for human and animal nutrition, but they potentially minimize phosphorous pollution of waterways [8].

Gene shuffling has been used to greatly improve the catalytic capabilities of an enzyme (GAT; glyphosate N-acetyltransferase) found in bacteria that naturally has a very weak ability to modify glyphosate herbicide (by addition of an acetate residue) to a form that is inactive in plants [9].

Such natural GAT enzymes are insufficiently active to confer glyphosate tolerance on transgenic organisms to which an unimproved version of the natural gene has been added.

But gene-shuffling work in the laboratory with extracted versions of the bacterial gene's DNA was successful after eleven iterations of DNA shuffling to improve enzyme catalytic efficiency by nearly four orders of magnitude. Artificially shuffled GAT enzymes were also effective in conferring increased glyphosate tolerance on the living bacterium Escherichia coli, and on living plants of Arabidopsis thaliana ( the model plant thale cress), tobacco, maize, and soybean.

This synthetic GAT trait has been applied to create herbicide tolerant soybeans and corn commercial seed seed varieties that are expected to reach the US market in 2009 [10] [11] [12]. In principle the gene-shuffling technique could be used to create other novel traits for plants.

Modern plant breeding allows plants to be modified to express proteins such as a therapeutic monoclonal antibody used in the treatment of arthritis, vaccine proteins, or for treatment of diarrhea [13], which can save thousands of childrens lives in the developing world. The term plant-made pharmaceuticals, refers to these therapeutic agents (pharmaceutical proteins) when they are produced in live plants. The production of plant-based pharmaceuticals is an emerging area of modern crop biotechnology.

In the twenty first century genome science involving (chromosome sequence decoding and computer assisted dissection of gene functions and structure) is increasingly used to assist plant breeders. One important approach is to compare gene arrangements in different species (comparative genomics) to take advantage of the greater ease of gene sequencing and faster progress with smaller more compact genomes such as those of Arabidopsis thaliana and Oryza sativa (rice), to provide clues for gene function and location in crop species with larger genomes.

A central repositary of plant gene sequences is accessible at The National Center for Biotechnology Information..

The fully completed plant genome sequences that are available include:

A large number of genetic maps are also available at this resource.

PlantGDB is another project to develop plant species-specific genome databases and web-accessible tools for genome browsing.

Genome sequences at available for browsing through PlantGDB comprise the following:

The controversies about "GM food safety" have given impetus to detailed systematic investigation of any unexpected changes in crop and food composition that may occur during plant breeding. There has been extensive experimental testing of "GM" foods and feeds in animal feeding trials and in detailed analysis of unexpected changes and possible toxic compounds present in them. By 2006 the strong weight of evidence about 150 scientific publications from this effort establish that foods created by biotechnology that have passed through regulatory agency scrutiny are at least as safe as the food from classical breeding.

Summaries of this effort include a comprehensive evidence based review of "GM" food safety carried out by the World Health Organisation (WHO) that was published in 2005.

This WHO report noted that "While new types of conventional food crops are not usually subject to safety assessment before marketing, assessments of GM foods were undertaken before the first crops were commercialized. " This study judged that "GM foods currently traded on the international market have passed risk assessments in several countries and are not likely, nor have been shown, to present risks for human health." [14].

Another review was published 2005 on the safety of animal feeds derived from biotechnology: [15] and it stated:

The results available to date are reassuring and reveal no significant differences in the safety and nutritional value of feedstuffs containing material derived from the so-called 1st generation of genetically modified plants (those with unchanged gross composition) in comparison with non-GM varieties. In addition, no residues of recombinant DNA or novel proteins have been found in any organ or tissue samples obtained from animals fed with GM [plants.

An important study Safety of Genetically Engineered Foods: Approaches to Assessing Unintended Health Effects (2004) carried out by the US National Academy of Sciences considered in depth the issue of unexpected outcomes in plant breeding and reported that:

After considering a full range of plant breeding techniques, including genetic engineering, this same National Academy report came to the considered opinion that:

" ... induced mutagenesis is the most genetically disruptive and, consequently, most likely to display unintended effects from the widest potential range of phenotypic effects."

There has been a recent research effort to establish the full compositional profiles (fingerprints) of proteins and metabolites present in conventional crop varieties and to compare them with the corresponding profiles in crops created by modern biotechnology.

Such studies provide factual evidence about the variability of food composition generated by classical breeding.

This evidence can be used as a baseline for establishing whether biotechnology derived crops fall within the range of traditionally accepted variability in crop and food composition, and whether or not they can be categorized as "substantially equivalent" to conventional crops based on chemical analysis.

The so far reported metabolic fingerprinting, mRNA transcript fingerprinting and protein fingerprinting investigations have continued to provide validation for the judgement - that transgenic crops created by direct DNA manipulation have similar, or even less unexpected variation in their composition than do the varieties created by classical breeding methods - that that was made in the earlier 2004 US National Academy of Sciences report [18] [19][20][21].