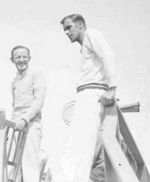 The two great rivals of the 1920s, "Little Bill" Johnston and "Big Bill" Tilden, circa 1925. Photo courtesy of the Chicago Historical Society.

Until "Big Bill" Tilden began to defeat him regularly in 1920, Johnston had been the best American player for a number of years. He remained competitive with Tilden for the next seven or eight years, but was never again able to beat him in an important match. Together they won seven consecutive Davis Cup trophies, a record that still stands as of 2010.

Johnston was a small, frail-appearing man who suffered ill health from his Navy service in World War I. He was renowned, however, for the power and deadliness of his forehand drive, which he hit shoulder-high with a Western grip, and which was generally considered the best forehand of all time until the advent of Pancho Segura and his two-handed forehand in the late 1940s. Johnston died of tuberculosis in 1946 at the age of 51.

Johnston was inducted into the International Tennis Hall of Fame in Newport, Rhode Island, in 1958.