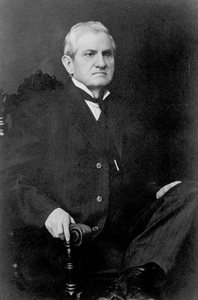 Benjamin Ryan Tillman (August 11, 1847 - July 3, 1918) was an American politician of German descent who served as governor of South Carolina, from 1890 to 1894, and as a United States Senator, from 1895 until his death. He was known as the foremost spokesman for white supremacy, and as the champion of white farmers and millhands, and the enemy of blacks and the upper class.

Tillman was born near Trenton, South Carolina. He left school, in 1864 when he was disabled by an illness, which resulted in the removal of his left eye; he never served in the Confederate Army. During Reconstruction, he became a paramilitary fighter in the struggle to overthrow the interracial Republican coalition in the state and disempower the black majority; he was present at the Hamburg Massacre, in July 1876, during which black Republican activists were murdered by Tillman's fellow "Red-shirts."

Posing as the friend of ordinary white farmers, Tillman took over the South Carolina Farmers Alliance, and used the organization as a platform for his political ambitions. He was elected Governor of South Carolina, in 1890, and served from December 1890 to December 1894. He helped establish Clemson College and Winthrop College while in office. When the Alliance founded the Populist Party on the Ocala Demands, Tillman arranged for the South Carolina Democratic Party to adopt the platform, wholesale. The strategy prevented the development of an independent Populist Party and the biracial politics of North Carolina--thus assuring white control through the dominant, white Democratic Party.

He was largely responsible for calling the State constitutional convention, in 1895, that disfranchised most of South Carolina's black men and required Jim Crow laws. As Tillman proudly proclaimed in 1900, "We have done our level best [to prevent blacks from voting]...we have scratched our heads to find out how we could eliminate the last one of them. We stuffed ballot boxes. We shot them. We are not ashamed of it." (Logan, p. 91)

He was elected as a Democratic member to the United States Senate in 1894, and was reelected in 1901, 1907, and 1913, serving until his death. A hotheaded and intemperate debater, Tillman became known as "Pitchfork Ben" after a speech he made on the Senate floor in 1896. In this speech, Tillman made several references to pitchforks and threatened to go to the White House and "poke old Grover [Cleveland] with a pitchfork" to prod him into action.

Tillman took the lead in railroad regulation, though his foe Republican President Theodore Roosevelt out-maneuvered him in passage of the Hepburn Act of 1906. Tillman was the primary sponsor of the "Tillman Act," the first federal campaign finance reform law, which was passed in 1907 and banned corporate contributions in federal political campaigns.

Tillman opposed American annexation of the Philippines because he feared an influx of non-white immigrants would result, undermining white racial purity. He was one of the most outspoken and unapologetic advocates of white supremacy ever to serve in Congress.