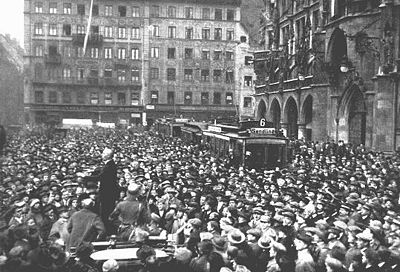 The Beer Hall Putsch was an attempt, in November 1923, for the Nazi Party, led by Adolf Hitler. While there were deaths on both sides, and the Nazis did not take control, the Putsch is often regarded as beneficial to the Nazis. It made them more visible, and also successfully removed Erich Ludendorff from the movement, in which he had rivaled Adolf Hitler. The imprisoned Nazis were held under pleasant conditions, and refined their organization, as well as providing a venue for Hitler to write the first volume of Mein Kampf.[[

Political tensions had been rising, both in the Weimar Republic generally and in Bavaria specifically, in 1922 and 1923. Hitler was sentenced to three months' imprisonment in 1922, of which he served four weeks for an incident in which he led Nazis to disrupt a meeting or the Bavarian League and beating its leader. He was carried to the podium on hs first public appearance after release. The local police, previously headed by a Nazi sympathizer, but now by Eduard Nortz, banned a rally in early 1923.

Ernst Roehm and Franz Ritter von Epp met with General Gustav von Lossow, the Reichwehr commander in Bavaria. The military commander, although dubious about Hitler's personality, said he would consider "the suppression of the nationalist organizations unfortunate for security reasons", Nortz requested the NDSAP to reduce the number of rallies, but Hitler, seeming to agree, ignored it. [1]

The Army, generally, had been marginal in its compliance with the Weimar Republic. It was not clearly subordinate to the Reichstag and the Cabinet. The French occupied the Ruhr in January 1923, and hyperinflation had begun. Hitler saw this as a time of opportunity. [2]

On November 8, Hitler and the Nazis, significantly without giving General Eric Ludendorff an opportunity to coordinate with them, sent a large force into a meeting, at a beer hall used for assemblies, being addressed by Gustav von Kahr, Prime Minister of Bavaria, who, with Army commander von Lossow and state police chief Hans von Seisser, ruled Bavaria. The three made promises, under duress, to Hitler, but quickly left.

The next day, Hitler and Ludendorff led a march on the War Ministry, here Ernst Rohm had been held. It is unclear which side fired first, but sixteen Nazis and three police died. Ludendorff was arrested on the scene, while the wounded Hitler and other Nazis escaped.

The Nazis involved were put on treason on 25 February 1924. Hitler was sentenced to five years imprisonment, which he spent, in comfort, in Landsberg Prison, along with associates. He wrote Mein Kampf during that time, and was released after serving nine months.