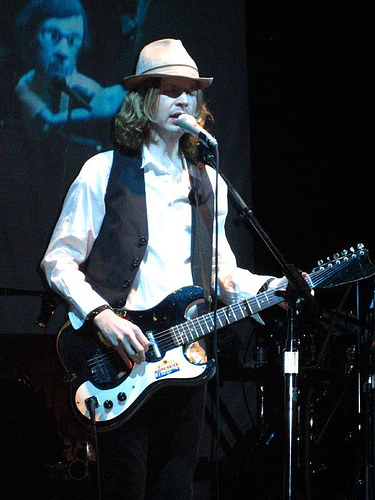 Beck (born Beck Hansen Campbell, July 8, 1970) is an American singer-songwriter who brought about music in the 1990s with a post-modern Bob Dylan sensibility. Beck is known for his pop art culture collage of different music styles, with his odd combination of folk, hip-hop, 1960s rock, and pop. Beck drew on an absurdist, free-flowing lyrical style that differentiated him from other major artists of the 1990s.

Born in Los Angeles, California, art surrounded Beck at an early age. His mother (Bibbe Hansen) had ties with the Andy Warhol Factory, his father (David Campbell) was a musician and son of a Presbyterian minister, and his grandfather (Al Hansen) was considered one of the most important figures in the 1960s art movement Fluxus. Beck stayed with his mother and brother in Los Angeles after his parents divorced and became influenced by the city's diverse musical flavor as well as his mother's art.

After being a part of the punk-influenced anti-folk movement of New York City's East Village in the late-80s, Beck returned to his native Los Angeles, playing everywhere from coffeehouses to punk clubs. Beck recorded the song "Loser" as a cheap demo for Bong Load Custom Records, whose 12" vinyl had a initial run of only 500 copies. "Loser" became a major hit on college and alternative rock radio all over Los Angeles. It became a pop-culture phenomenon when Beck signed on to major label DGC. Beck's debut album Mellow Gold released in 1994 and made Beck a mainstream smash success with his odd meld of musical genres.

Beck was allowed to record for other music labels in his unusual contract, releasing the noisy Stereopathic Soul Manure on Flipside Records and the more folk-influenced One Foot in the Grave on K Records in the same year as his first. Despite this, some critics still labeled him a "one-hit wonder". This view was put to rest with the release of 1996's Odelay, establishing Beck as a leader in alternative rock. The album was influenced by hip-hop and sampling even more so than his debut and the single "Where It's At" received heavy radio airplay.

Mutations, Odelay's follow-up album, explored Brazilian pop as well as many folk and blues influences. Beck returned to beat-heavy pop for his release of the much-anticipated 1999 album Midnite Vultures, which ended up being a major commercial disappointment. Sea Change came next in 2002, an emotional album that contained some of Beck's most personal lyrics. Sea Change reached #8 on the charts and became Beck's first U.S. Top 10 album. The Sea Change tour featured the Flaming Lips as the opening and backing band. Beck returned to the genre-hopping sound of Odelay with 2005's Guero, which blended elements of blues, Latin American music, 1970s R&B, and rap-rock. Guero featured collaboration with guitarist and singer Jack White of The White Stripes. 2006's The Information, Beck's latest venture, featured a largely electronic, spacey psychedelic sound.