Fought in the largest naval battle in history, the Battle of Leyte Gulf (actually a campaign), the Battle of Surigao Strait, on the night of 24-25 October 1944, was the last engagement in which battleships fought one another. Surigao Strait actually consisted of two engagements between one U.S. force and two uncoordinated Japanese forces. Both were decisive Japanese defeeats. U.S. forces, under RADM Jesse Oldendorf, suffered only slight damage and no losses.[1] 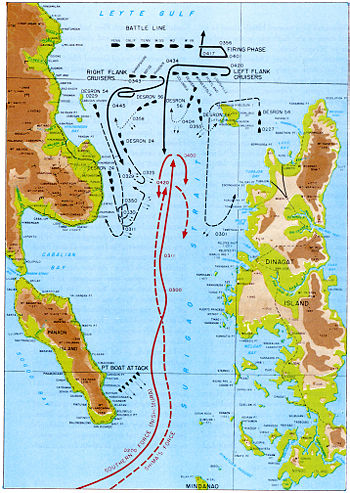 Leyte Gulf, on the U.S. side, suffered from command and communications failures, although not remotely as severe as those on the Japanese side. VADM Thomas Kinkaid, commanding the United States Seventh Fleet, the invasion force, assumed, incorrectly, that ADM William Halsey had formed Task Force 34 (TF 34), which protected the invasion transports and support ships from an attack from the north. Kinkaid sent his Seventh Fleet Support Force, under Oldendorf, south to intercept Nishimura's force, of two battleships, one cruiser and four destroyers.

Equipped with superb optics, the Japanese began the war ruling night action. The Allied development of radar, however, neutralized this advantage, but the Japanese often still preferred stealth by night. This battle actually consists of two separate engagements, in which a U.S. force built around the Seventh Fleet Gunfire Support Unit defeated, successively, Force C of the First Striking Force under Vice Admiral Shoji Nishimura and the the Second Striking Force under Vice Admiral Shima. It was the last engagement in which battleships fought directly, although much of the damage was done by torpedoes from destroyers.

The Japanese forces under Admirals Nishimura and Shima had no common command, minimal coordination, and were too far apart for mutual suport. Nishimura's stronger force came first, and all but one destroyer, IJN Shigure, sunk. Forces in Surigao Strait were an afterthought. "Admiral Shima's fleet happened to be there at the same time. In order to get to Leyte they decided to combine. It was not originally planned that Admiral Shima's force should take part in this southern action. It happened only by a series of coincidences that he was first ordered to Okinawa, then to Manila by Bako to attack your force but found it impossible; and so while en route to Manila he was given orders to follow Admiral Nishimura's force in an attempt on Leyte Gulf. This was truly an appendix to our plan."[2]

Commander Shigeru Noshino, captain of IJN Shigure, was the only surviving commander of Nishimura's Force C. He said "The first job was to attack the transport force. If we were fully occupied with that we would not bother with the warships. The primary mission was to destroy the transports." With respect to relations between Nishimura and Shima, his opinion was "To the best of my knowledge Nishimura was older than Shima and had more naval and battle experience, in spite of that Shima was his superior; probably nothing more than a personal antipathy. In my opinion, however, we should have joined forces...[Nishimura] was an old destroyer man. I never met Nishimura personally, but it was said of him that he was clever and a capable Navy man. I will say this much, though, that there are some people who think Nishimura was very fortunate not to have returned from this battle. " [3]

Force "C" of the First Striking Force, under VADM Shoji Nishimura, lost both battleships and all of its other ships except the seemingly charmed destroyer, IJN Shigure. It ran into Seventh Fleet Support Force, with had six battleships, four heavy cruisers, four light cruisers, 29 destroyers and 39 PT boats. To pass the strait and reach the landings, Nishimura had to run the gauntlet.

Running this gauntlet meant that Nishimura would have to withstand multiple short attacks, first from PT boats and then destroyer formations, primarily attacking with torpedoes. Using a modern paradigm, Oldendorf's light forces made multiple swarming attacks on Nishimura's force. While the PT boats were more of a nuisance than a danger, they disrupted the Japanese and also reported accurately on the Japanese formation, course and speed. Armed with this information, the destroyers then were able to make effective torpedo attacks, long before Nishimura came into range of the battleships at the end of the strait. At about 03:00 the Japanese battleship Fuso and three destroyers were hit by torpedoes and Fuso broke in two. American destroyer torpedo action was exceptionally effective; quite possibly the most devastating of the war.[4]

At 03:50 the American battleships opened fire using radar fire control that allowed them to hit targets from a much greater distance than the Japanese. The battleship Yamashiro sank under heavy shell from the battleships and cruisers. Cruiser Mogami was left crippled. Only the destroyer IJN Shigure survived as an operational unit.

Commanded by VADM Kiyohide Shima, the Second Striking Force had no battleships, but several cruisers and was ordered to follow the Nishimura force. At approximately 0100, they saw gunfire flashes ahead and listened to Nishimura ordering evasive action. At 0325, light cruiser IJN Abukuma was damaged by a torpedo. At 0424, he had cruisers launch torpedoes at presumed American targets, but obtained no hits.

While he did not know what happened to Nishimura — who, having gone down with IJN Yamashiro, was in no position to enlighten him — he assumed the worst and broadcast a message "This force has concluded its attack and is retiring to plan subsequent action." As he pulled back, his heavy cruiser IJN Nachi collided with IJN Mogami of Force C, still barely afloat. Shigure also joined his formation.

Oldendorf called for an air attack on retiring forces at 0440. They had stayed out of radar range of his main force, but a PT unit acquired them and gave position reports. Oldendorf's followup destroyer division sank another remnant of Force C, the destroyer IJN Asagumo'.

After daybreak, an air strike from Seventh Fleet disabled Mogami, and refueled to assist in the Action off Samar. The Japanese rescued the crew and sank the cruiser. Army bombers sank Abukuma at 1424. [5]

Cdr. Noshino of IJN Shigure gave examples of the poor communications among the forces. "At 1200 hours of the 25th I sent the following dispatch to Admirals Toyoda and Kurita, "The Third or 'C' Force has been annihilated, location of enemy unknown, please send me your instructions. I have trouble with my rudder, my wireless, my radar, and my gyro, and I received one hit." The reason I did not communicate directly with Admiral Shima and inform him of the situation was that I had no connection with him and was not under his command...I assumed that Shima knew conditions of the battle and that he would get his instructions from his Commanding Officer, Admiral Kurita or from Toyoda.[3]

The Battle of Surigao Strait marks the end of an era in naval warfare. It was the last naval battle in which air power played no part, except in the pursuit. It was the last engagement of a battle line

...when Mississippi discharged her twelve 14-inch guns at Yamashiro, at 0408 October 25, 1944, she was not only giving that battleship the coup de grace, but firing a funeral salute to a finished era of naval warfare. One can imagine the ghosts of all great admirals from Raleigh to Jelligoe standing at attention as Battle Line went into obligion, along with the Greek phalanx, the Spanish wall of pikemen, the English longbow and the row-galley tactics of Salamis and Lepanto.[6]