Fought on March 8-9, 1862, while tactically a draw or a slight Confederate win, the Battle of Hampton Roads was among the most significant naval battles of history. [1] It was, however, a strategic Union victory in that the Confederacy was unable to break the blockade.

While some battles were notable because one side introduced a "silver bullet" advanced technology, obsoleting the other side's systems, this is unique in that two successive silver bullets fought on two successive days. The ironclad CSS Virginia, often called the Merrimac after the abandoned Union ship from which she was adapted, was the first armored steamship to enter combat, far more advanced than anything else afloat — for a day. She was then met by the even more advanced USS Monitor. 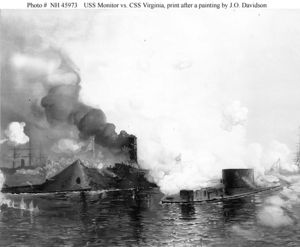 Virginia was still based on a conventional broadside design, with a main battery of rows of 8" cannon in fixed mounts, six on each side, with unconventionally sloped sides covered with iron plate armor. Sloped armor is considerably more effective than vertical armor, a technology lost in tanks until after the Second World War. After sinking the wooden USS Cumberland and damaging the USS Congress, Virginia returned to dock. While there actually had been internal damage from the concussive effect of Union hits, it had appeared as she had shrugged away the heaviest gunfire.

On the next day, however, an even stranger-looking vessel, USS Monitor, came to meet her. Derisively called a "cheesebox on a raft", Monitor, even lower in the water than Virginia, was a leap forward in design. The power of naval guns increases exponentially with their shell diameter, or caliber. While Monitor had only two guns, they were 11", and mounted in a revolving turret, so she could aim them at any relative bearing to her opponent, not only in the conventional parallel course for broadside weapons. The turret was more heavily armored than the sides of the Virginia; while the 11" projectiles still did not penetrate efficiently, their concussive effect was far worse. She anticipated the "all-big-gun" design formalized in HMS Dreadnought (1905), urged by British Admiral "Jacky" Fisher.[2]

After pounding each other, with both commanding officers wounded, the two vessels withdrew, never again to engage in combat. The Union continued its blockage, able to replace their ships more easily than the Confederacy.