The Battle Efficiency Award, commonly known as the Battle "E" is awarded annually to the small number of U.S. Navy ships, submarines, aviation and other units that win their battle efficiency competition. 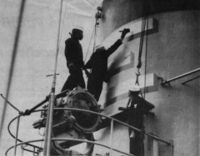 Crewmembers paint a Gold E on the stack of USS Rankin (AKA-103)
The criterion for the Battle Efficiency Award is the overall readiness of the command to carry out its assigned wartime tasks, and is based on a year-long evaluation. The competition for the award is, and has always been, extremely keen. To win, a ship or unit must demonstrate the highest state of battle readiness.

The Battle Efficiency Award recognizes sustained superior performance in an operational environment within a command. To qualify for Battle E consideration, a ship must win a minimum of three out of four command excellence awards (Maritime Warfare, Engineering/Survivability, Command and Control, Logistics Management), and be nominated by their immediate superior in command. Eligibility for the award demands day-to-day demonstrated excellence in addition to superior achievement during the certifications and qualifications conducted throughout the year. A ship’s performance during training exercises, weapons inspections, and tactical readiness examinations are among the 16 different areas that are considered in the competition.

Ships that win a battle efficiency competition are authorized to paint a white "E" on their stacks or elsewhere to give evidence of the honor. For winning each subsequent consecutive competition, the ship paints an angled line or "hashmark" below the white E. The very rare winners of five consecutive E's replace the white E and hashmarks with a Gold E. The E and any hashmarks are removed in the year the ship first fails to win the award.

Personnel of ships and units that win the Battle "E" are authorized to wear the Navy "E" Ribbon and Battle "E" Device. Before 1976, they wore a small cloth "E" on their uniform sleeves, with hashmarks and color corresponding to that on their ship or unit.