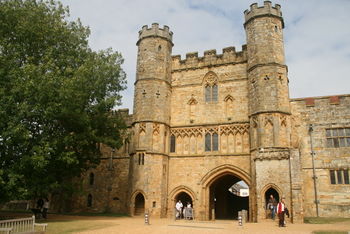 (CC [1]) Photo: Mark Abel
Battle Abbey's 14th-century gatehouse has two doorways, one for vehicles and a smaller one for people entering on foot.

Battle Abbey was founded as a Benedictine monastery by William the Conqueror in the late 11th century on the spot where King Harold was killed during the Battle of Hastings. With Dissolution of the Monasteries in the 16th century under Henry VIII Battle Abbey was taken under secular control and many of its buildings demolished.[1]

William the Conqueror most likely founded Battle Abbey as part of the penitence imposed on him by Pope Alexander II for waging war on the English.[2][3] If that was the case construction probably began around 1070. The high altar was to be built on the spot where King Harold was killed.[4] However, as the site of the battle was not particularly suited to building work, supervised by a monk named William, began on land to the west. This was done without consulting the king who on hearing the news chastised the monk and reiterated his order to built the abbey on the battlefield. One of the issues with the proposed building site was that there wasn't a sufficient supply of water for a monastic community. According to the Chronicle of Battle Abbey King William replied "If God spare my life I will so amply provide for this place that wine shall be more abundant here than water is in any other great abbey".[5]

William intended for the community to consist of 140 Benedictine monks (though it is uncertain whether this number was ever reached). Six years later the site was consecrated, but remained a work in progress. In 1094 the church was completed, though other parts of the abbey continued to be built, and was reconsecrated. Gifts to the abbey made it a wealthy institution, and the abbot in charge was granted absolute authority within the area 1.5 miles from the high altar. This independence from outside authority brought the abbey into conflict with the Bishops of Chichester, who controlled the diocese the abbey was a part of. The dispute over who should be in charge of the abbey – the bishop or the abbot – even saw the excommunication of Walter de Luci, the abbot between 1139 and 1171. In 1211 the abbots paid King John 1,500 marks for the right to operate without interference from the Bishop of Chichester.[4] 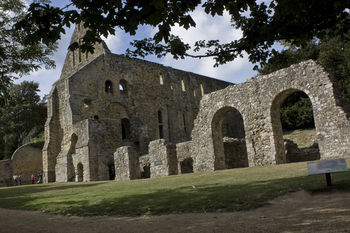 (CC [2]) Photo: Rick Rowland
The east range of Battle Abbey dates from the 13th century when the monastic community was wealthy enough to remodel the abbey.

The abbey was supported by the income from its estates, and in the 13th century a succession of abbots set about buying further property; in the case of agricultural land the produce was sold, and when buildings were bought they were rented to tenants. The increasing income allowed the abbey buildings to be remodelled in the 13th century. Though this was a time of prosperity for the abbey, the following century saw its fortunes wane under the influence of the Hundred Years War and the Black Death. The French raided the English coast during the war, and the abbey's holdings were effected. During the Hundred Years War the abbot was responsible for raising forces to defend art of the coast.[6] The king granted the abbot a licence to "fortify with a wall of stone and lime",[5][7] and the gatehouse which still stands was built during the 1330s. Constructed in the context of armed conflict with France, Jonathan Coad who wrote the guidebook for English Heritage considers that it was built to protect the abbey.[6] However, architectural historian John Goodall believes that the large gatehouses built attached to monastic buildings, though derived from castle architecture, were constructed to “articulate feudal power … in architecture”. Those belonging to Benedictine monks were amongst the most decorated and impressive.[8] By 1352 the community had shrunk to 34 monks as a result of the Black Death. With occasional outbreaks of pestilence the community declined to 23 in the early 15th century but recovered to 31 in 1490, though still lower than before the Black Death.[9] 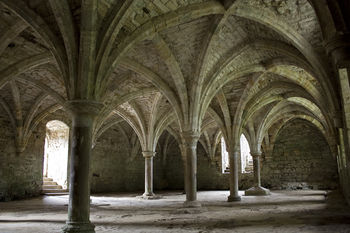 (CC [3]) Photo: Rick Rowland
Though much of the abbey was dismantled in its later history, the 13th-century vaulting within the east range survives.

The Dissolution of the monasteries was conducted in the late 1530s under King Henry VIII. As part of this, on 27 May 1538 Battle Abbey was given over to the control of Dr Richard Layton, an official of the Crown. The monastic community consisted of an abbot, John Hammond who was given a pension of £100, and 16 monks. Layton compiled an inventory of the abbey's contents when it was taken over by the Crown, and he remarked "so beggary a house I never see, nor so filthy stuff". In 1535 the Abbey had an income of £880, making it one of the richest Benedictine houses in England. Layton's testimony likely means the monks had been removing valuables from the Abbey in anticipation of its seizure by the king. In August 1538 the abbey and much of its associated land was given by Henry to Sir Anthony Browne.[10] Browne was even given a royal licence in 1544 permitting him "embattle and fortify buildings within the site of the late mon.[astery] of Battle".[11][12] However, under his ownership much of the abbey complex was pulled down, including the church, chapter house, and refectory.[10]

Sir Anthony Browne adapted the abbot's lodgings to act as a residence. Ownership of the abbey descended through the Browne family until 1721 when Anthony Browne, the sixth Viscount Montague, sold the abbey and its 3,200 hectare estate to Sir Thomas Webster. Though rarely in residence, the family had a serious influence on the fabric of the abbey: aside from the demolition conducted by Sir Anthony Browne, the kitchen was dismantled in 1685 under orders from the fourth Viscount Montague. There was some building work, and in 1592 a courthouse was built next to the great gatehouse which still acts as the main entrance. Under the Webster family the abbey underwent further changes, with the partial demolition of the guest house while the surrounding area fell into a dilapidated state. In the late 18th century Sir Godfrey Webster sold parts of the Battle Abbey estates to pay off gambling debts, and the remaining abbey buildings lapsed into a state of disrepair.[13]

Sir Godfrey's son, also called Godfrey, set about restoring the abbey estates in the early 19th century. The dilapidated abbot's house was repaired, gardens were created, and new kitchens and domestic buildings were constructed. Sir Godfrey also arranged for the excavation of the east end of the abbey's church. Like his father, Godfrey accrued substantial gambling debts and sold off parts of the estate. However, the debts were not fully repaid and the family had to sell the Abbey and its land in 1857. It was purchased by Lord Harry Vane, later the fourth Duke of Cleveland; when he died in 1891 his wife inherited and on her death in 1901 the abbey was bought by Sir Augustus Webster, a relative of Sir Godfrey Webster. Since 1922 the abbey has housed a school. The British government bought the abbey in 1976 with help from American donors. Since then, it has been in the care of English Heritage and is open to the public. Battle Abbey has long been a tourist destination, but the 1852 opening of the Hastings Line railway between Tunbridge Wells and Hastings saw a dramatic increase in visitor numbers.[14] It is both a Grade I listed building and a scheduled monument.[15]