This article is about the use of baseline in surveys. For other uses, see Baseline. 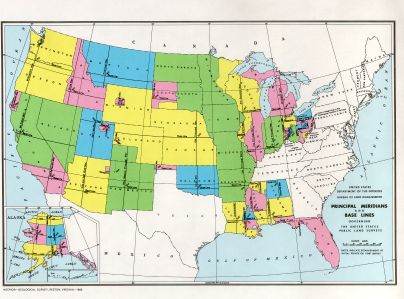 This BLM map depicts the principal meridians and baselines used in the surveying of the United States.

In the United States Public Land Survey System, a baseline is the principal east-west line that divides survey townships between north and south. The baseline meets its corresponding meridian at the point of origin, or initial point, for the land survey. For example, the baseline for Nebraska and Kansas is shared as the border for both states, at the 40th parallel.

Often, a baseline is marked by other features such as a road or boundary between counties.

"Baseline Road" in the United States

In Canadian land surveying, a base line is one of the many principal east-west lines that correspond to 4 tiers of townships (2 tiers north and 2 south). Each base line is about 24 miles apart, with the first base line at the 49th parallel, the Western US-Canadian border. It is therefore equivalent to the standard parallel in the US system.