Bacillus anthracis is the pathogen that causes anthrax Originally known as an important animal pathogen, it was the first bacterium to be used for the preparation of a vaccine based on attenuated bacteria by Louis Pasteur in 1881.

It is listed in the Select Agent Program and is considered a high-risk biological weapon of CDC Bioterrorism Agents-Disease list Category A. While it was never used in combat, it was weaponized, and is the only spore-forming agent that will contaminate ground for significant periods of time. After a British open-air test, an area of Gruinard Island was dangerously contaminated from 1942 until a major decontamination in 1984.

Bacillus anthracis is a large, rod shaped bacterium. Under ideal conditions, B. anthracis organisms are surrounded by a gel-like covering called capsule. This coating protects it from the immune systems of a host animal, and makes it virulent. B. anthracis's capsule is made up of poly-D-glutamic acid. Anthrax organisms usually range in size from about 1 to 1.5 microns in width and about 3 to 10 microns in length. 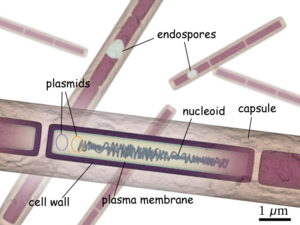 Structure of a Bacillus anthracis bacterium
In its vegetative state B. anthracis is Gram-positive, therefore it contain extensive peptidoglycan layer, lipoteichoic acid, and crystalline cell surface protein (S-layers). What separates B. anthracis from other Gram-positive bacteria is that it does not contain teichoic acid and the S-Layers are not glycosylated.

Composed of three polysaccharides: Galactose, N-acetyl mannose and N-acetyl glucosamine, the cell wall's main function is to anchor the S-layers.

It was one of the organisms used for the development of the "Koch's postulates". Its importance stems from being able to be isolated in pure culture.

It is believed to be the sixth plaque mentioned in the Bible.

Was first known to infect animals in the year 17 bc when a Gallic farmer noticed his sheep flock suddenly dying. 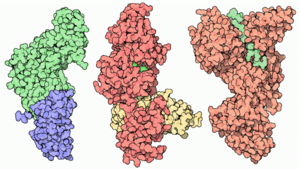 Structures of LF, EF, and PA

Consisting of a single chromosome, Bacillus anthracis genome is circular and contains approximately five million base pairs. The virulent factors that are associated with Bacillus anthracis are found on two plasmids pXO1 and pXO2. The plasmids are circular, double stranded DNA molecule, and extra chromosomal.

Anthrax, but not Bacillus anthracis?

The question of whether Bacillus anthracis is responsible for anthrax arises from recent studies that suggest the similarity between B. anthracis to B.cereus and B. Thuringiensis is higher than previously known. It used to be that the only distinguishing factor of Bacillus anthracis was the presence of two large virulent plasmids pXO1 and pXO2. Recent studies, however show that the genetic backbone for both the pXO1 and pXO2 plasmids are not restricted to Bacillus anthracis but that it’s found in Bacillus cereus and Bacillus thuringiensis. Isolates of B. cereus continue to show similarity in terms of structure of one of the two plasmids present in B. anthracis. The only difference was that the capsule of B. cereus lacks poly-γ-D-glutamic acid. These two isolates and many other isolates, led to the expansion of the phenotypic and biochemical properties that were used to define Bacillus anthracis. Some of those properties were: capsule production, non-motility, susceptibility to γ-phage, non-hemolyticitly, and susceptibility to penicillin. Even with this expansion some isolates are still miss-designated because of unusual properties. At present, there does not exist any single characteristics or molecular trait that defines one class over another. It used to be that when an organism appears to have anthrax-like symptoms Bacillus anthracis was thought to be responsible. Nowadays a thorough exam must be done to rule out the presence of any B. cereus or B. thuringiensis.

Nearly all warm-blooded animals are vulnerable to anthrax. Some of anthrax victims are herbivores especially grazing animals such as cattle and sheep. Anthrax is also seen in domesticated animals such as horses, mules, goats and camels. Anthrax is not limited to domesticated animals, it's also seen in wild animals. On the other hand cold blooded animals are not affected by anthrax at all. The reason for this is because a Bacillus anthracis bacterium grows best at temperatures ranging from 25 °C (77 °F) to 40 °C (104 °F). Animals whose body temperature does not fall within the range will be immune to anthrax. A good example of an animal whose body temperature is above the permissible range for Bacillus anthracis and is thus immune to anthrax, is a bird.

Life cycle begins with the exposure of the bacterium to harsh conditions such as the death and decomposition of a host which results in the formation of spores. The process of spore formation is dependent on oxygen and thus does not occur in intact corpse. Once spores are formed they are highly resistant to drought, heat, cold, disinfectant, and other unfavourable surroundings. The high resistivity of spores is due to hardy, thick-walled, oval bodies that have an average diameter of about 1-3 microns. Its these characteristics that allow spores to lie dormant in natural environments for hundreds of years.

The life cycle continues once the spores are taken up by an animal which then allows them to transform back into an active bacillus. The bacterium then begins to multiply and spread through the creature's body. Over time huge population of germs develop and produce toxin, thus resulting in the host's death, and the reformation of the bacteria into spores.

During vegetative state deprivation of certain nutrient result in endospore formation, this process must occur in the presence of oxygen.

When in an aqueous environment, spores germinate and grow.

Anthrax can strike at any time, but the most frequent time period when many grazing animals usually get sick is during the dry summer months. It’s this time period that available forage decrease. The spores can enter an animal's body when the animal eats a plant along with its root. The coarse vegetation can cause small cuts and abrasions in the mouth, lungs, and intestine of a grazing animal allowing spores to enter the body.

Once infection occurs, the incubation period is usually between 3 and 7 days. The course of illness varies with the form of the disease and the animal infected. Death from anthrax usually results from septicaemia or blood poisoning which is caused by high levels of Bacillus anthracis organisms and the toxins they secrete. At the time of death, there are on average 10 million to 100 million Bacillus anthracis organisms per millilitre of blood. The presence of the large amount of toxins results in kidney failure, tissue damage, massive swelling, and shock. The shock results from the decline of body functions due to reduced blood circulation.

In the instance where an animal is able to survive an anthrax infection, it will become immune to the disease and thus cannot be re-infected.

The toxin itself is composed of three plasmid encoded protein. Two of the three proteins are directly toxic, and they are Lethal Factor (LF), and Edema Factor (EF). Increase of LF and EF cause the destruction of white blood cells and the increase in levels of cAMP respectively. Increase in cAMP causes massive oedema, thereby impairing energy and water balance. The presence of EF reduces immunity and thus the host becomes susceptible to infection. The third protein is the Protective Antigen (PA) by itself is not toxic. If the PA is inactivated the LF and EF will be harmless. The pXO2 plasmid is responsible for the production of a capsule. 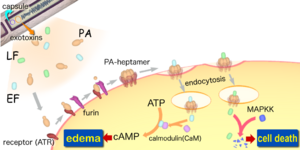 The interactions between the three proteins (PA, EF and LF).

Host damage, in anthrax, is due to the secretion of three polypeptides that form anthrax toxin: the Protective Antigen (PA), Lethal Factor (LF), and Edema Factor (EF). The PA is responsible for binding to the surface of target cells. This binding facilitates the release of LF a metalloprotease that is shown to cleave six of seven Mitogen-Activated Protein Kinase Kinases (MAPKK's). The binding also facilitate the release of EF an acalmodulin-dependent adenylate cyclase that converts ATP to cAMP.

For anthrax to damage the organism, binding between receptors and PA must occur. Without binding, anthrax causes no damage, and an organism will survive. Drosophila do not allow the binding due to the absence of genes that code for receptors in the genome. Regardless of this, Drosophila can be still used to study the effect of anthrax through direct expression of LF and EF. Directed expression allows for greater experimental control, flexibility, and specificity in manipulation of toxins actions in vivo. The knowledge of LF and EF function in Drosophila, allows for the testing of known inhibitors and discovering of new drugs against anthrax toxin. 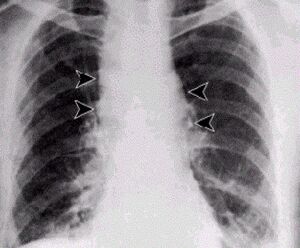 Macrophages, after the inhalation of anthrax spores, play roles both in defense or an enabler of spore movement. They are used for defense, because they efficiently sequester spores in the presence of minimal nutrient killing spores that germinate before outgrowth. Following inhalation, spores end up in diverse locations in the trachea and lungs, but a large number get engulfed by phagocyte cells. It was shown in mice that as macrophages level go down, spores germinate more rapidly. Upon entry into the vegetative state, capsule formation takes place, and as time passes, the vegetative cell becomes infective.

The experiment began by preparing primary macrophages that were derived from the bone marrow cells of the femurs of a female mouse. After maturation the macrophages were then infected with spores, at different levels of concentration of Foetal Bovine Serum (FBS) and Horse Serum (HS). It was concluded that the extent of germination of spores inside macrophages was dependent on the medium. Aside from being medium dependent, D-alanine was shown to block germination of 70% of the spores in macrophages.

All the images were taken from Wikimedia commons [1]