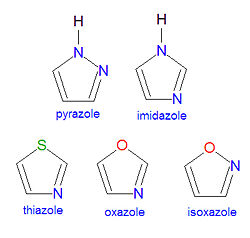 An azole is a chemical compound containing a five-membered aromatic ring structure with two heteroatoms, at least one of which must be a nitrogen atom. One, and only one, lone pair of electrons from each heteroatom is part of the aromatic bonding in an azole. Examples of common azole compounds include pyrazole, imidazole, thiazole, oxazole and isoxazole, shown in the illustration. The name or suffix azole changes upon saturation of the double bonds. When one of the double bonds becomes saturated, the resulting compound name changes its ending from azole to azoline, and further reduction of the second double bond produces an azolidine. Thus, the saturation of one double bond of oxazole yields 2-oxazoline and a further reduction yields oxazolidine. Six-membered aromatic heterocyclic systems with two nitrogens exist, and two of them, pyrimidine and purine, are particularly important biochemicals. The numbering of ring atoms in azoles starts with the heteroatom that is not part of a double bond, and then proceeds towards the other heteroatom.