On Sunday, 1 February 1981, Australia played New Zealand in a Limited Overs International (LOI) match at the Melbourne Cricket Ground. The game was the third in a series forming the final of the B&H World Series Cup.[1] The teams were limited to fifty overs apiece. Australia batted first and totaled 235 for four in fifty overs. In reply, New Zealand reached 229 for eight after 49 overs and five balls, meaning that they needed to score six off the final ball of the match.

As instructed by his brother and captain Greg Chappell, the bowler Trevor Chappell used an underarm action to deliver the ball all along the ground without pitching it. The batsman Brian McKechnie had no chance at all of hitting such a delivery for six. He did not score any runs and threw his bat to the ground in disgust before walking off. Australia therefore won the match by six runs and the incident resulted in underarm bowling being made illegal by the International Cricket Council (ICC). It is considered one of the most disgraceful moments in the history of cricket and it seriously damaged the reputation of Australians as fair sportsmen. 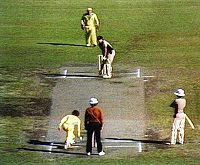 A screenshot of the underarm delivery with Trevor Chappell bowling, Brian McKechnie facing, and Bruce Edgar at the non-strikers end.

The five-game series was tied one-all as New Zealand had won the first match and the Australia the second match. Australia having won the toss chose to bat and accumulated a reasonable score of 235 for 4, in 50 overs. Australian captain Greg Chappell top scored with an innings of 90, despite appearing to have been caught on the boundary by Martin Snedden on 52 and refusing to walk.[2]

New Zealand strongly replied by scoring 229 in 49.5 overs with Bruce Edgar scoring 102 not out, and they required six runs to tie the match with two wickets remaining, off the final delivery. Trevor Chappell prepared to bowl the final ball of the match. He had already claimed two wickets in that over, one a dubious lbw (Richard Hadlee) and one bowled (Ian Smith) using his regular bowling action. Brian McKechnie walked out to bat with one delivery to face and still needing six runs to tie. McKechnie was a lower-order number ten batsman who had never hit a six in his career. Greg Chappell instructed his brother to bowl underarm and roll the ball along the pitch so that McKechnie could not score a six. Even for a specialist batsman facing a regulation delivery, it is very difficult to score six over the boundary at the MCG, one of the world's largest cricket grounds.

McKechnie was unable to loft the ball for six and was forced to block out the delivery, then threw his bat in the direction towards the New Zealand dressing room in disgust as both teams left the field of play. Even though Australia had just won the match, spectators booed and jeered the Australian team off the field for displaying such bad sportsmanship.[3] It was later discovered in a video replay that, in the confusion before the final ball was bowled, one of the fielders, Dennis Lillee, had failed to walk into position, meaning that the underarm ball at delivery was actually a no-ball, because under the playing conditions Australia had one too many fielders outside the field restriction circle. This was not called by the square-leg umpire. Extra police came onto the field to cordon the ground from a crowd invasion and the furious New Zealand captain Geoff Howarth ran up to the umpires, disgusted at what had transpired, to point out that no bowler may deliver the ball underarm. This was specified in Rules of the Benson & Hedges Cup 1980 under Appendix H (iii). No Ball – Mode of Delivery. The umpires refused to overturn their decision to end play, claiming that this specific rule had not been declared valid for the 1980–81 series.

The act was roundly criticised on both sides of the Tasman Sea and the Prime Ministers of both countries castigated the Chappell brothers. The Prime Minister of New Zealand, Robert Muldoon, called it "the most disgusting incident I can recall in the history of cricket" and said it was "an act of cowardice and I consider it appropriate that the Australian team were wearing yellow".[4] His Australian counterpart Malcolm Fraser agreed that it was "contrary to the traditions of the game".[5] Veteran cricket commentator Richie Benaud called it "a disgraceful performance" and "one of the worst things I have ever seen done on a cricket field".[6]

In spite of everything, the Australian Cricket Board took no action against the Chappell brothers. The incident angered many in the cricketing community and prompted a change in the Laws of Cricket.[7] In the 2017 revision of the Laws, an underarm delivery must be adjudged and called a "no ball" unless it is bowled in accordance with a special agreement made before the match.[8]