Following in the wake of the Ottoman Empire’s demise and a prolonged war of independence Turkey was established as a Republic in 1923. For its system of higher education the Republic inherited some 300+ Islamic medreses, one of which was converted into a fledgling university at the turn of the century, and three military academies, one expanded into a civil engineering school around 1909. By the early 1930s the government was ready to address the modernization of its system of higher education. Because there were few Turkish citizens sufficiently educated to accomplish Turkey’s medical/educational reforms, the new government took Europe’s tragedy and turned it into an opportunity from which it could benefit. Some 190 eminent intellectuals for whom America was out of reach because of restrictive immigration laws and wide spread anti-Semitic hiring bias at its universities were invited to Turkey to develop its system of higher education. Along with family members and staff these invitations saved the lives of over 1000 people. Yet this important episode of Turkey’s role in the Shoah, in which Albert Einstein played a role, is a fact hardly known outside of Turkey and has scarcely been noticed by historians. [1]

Historians of higher education might have difficulty matching so significant a qualitative transformation implemented at the national level in so short a time frame. One country’s great loss was another country’s gain and a third country’s benefits delayed as most of the intellectals who found refuge in Turkey ended up in the US at war’s end.

The concept of creating a completely modern system of higher education modeled on West European universities was based on the Rapport sur l’universite´ d’Istanbul written by Swiss educationalist Albert Malche´ in 1932 at the Turkish government’s request. Based on Malche’s recommendations, on July 31, 1933 , the Dar'ül fünun was officially closed by government decree as a means of canceling all existing faculty contracts. The very next day Istanbul University was opened using Dar'ül fünun’s physical plant with a small fraction of its original faculty and over 30 world renowned émigré German professors.

The vast majority of émigré professors were in medicine, mathematics, and natural science. There were fewer émigrés in the faculties of law and the arts. Starting in the 1933-1934 academic year, Germany’s exiled professors served as directors in eight of twelve basic science Institutes, as well as six directors of Istanbul’s seventeen clinics at the Faculty of Medicine. However in a report submitted in the Fall of 1933 by Professor Philipp Schwartz, the entire Faculty of Medicine experienced scarcities of equipment and buildings. There were only 30 extremely old microscopes in all seven basic science disciplines. The clinics were in bad shape, neglected and under equipped. This observation by an émigré professor was in part confirmed independently.

Few of the academics found their way to Ankara. This was due primarily to the fact that the University of Ankara was mostly undeveloped land. Only a few institutes and scientific organizations existed. The disciplinary borderlines were not as clearly defined in Ankara as they were in Istanbul. Unlike those invited to the University of Istanbul by the Notgemeinschaft, most of the scientists, architects, and artists came to Ankara through the auspices of the official German and Austrian legations. In Ankara, the biggest share of emigrants was to be found in the state school of music followed by the faculty of arts and the medical institutes.

A couple of decades after the Ottoman empire took its last breadth and as the general exodus from Germany denuded Germany of its premier institutions of higher learning, the University of Istanbul was rightfully considered and sincerely called “the best German University in the world.” Astonishingly, courses began in November, 1933.

"New Professors of the University" 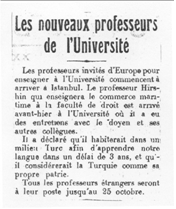 New professors invited from Europe to teach at the University have started to arrive in Istanbul. Professor Hirsch who will teach maritime commerce at the Law Faculty arrived the day before at the university where he had talks with the dean and his colleagues. He stated that he will reside in a Turkish milieu in Istanbul so that he can learn Turkish within three years and that he considered Turkey as his own country. All the foreign professors will be at their posts by 25th of October. Le Journal d’Orient October 20, 1933. Courtesy Rockefeller [Foundation] Archives Center. Collection RF; Record Group 1.1; Series 717; Box 1; Folder 1.

The general exodus of scholars had so depleted Germany’s premier higher-learning institutions of professors that the University of Istanbul was rightfully considered and sincerely called “the best German University in the world.” There is no doubt that their collective impact on all aspects of Turkey’s system of higher education, heath care delivery, and in the arts was monumental and it is greatly appreciated within Turkey and among its intellectual Diaspora today. Contemporary Turkey sports 72 universities many equal and some better than most universities in the US.

To day Turkey is several decades ahead of western countries, particularly the United States, in terms of percentages of women working as physicians, (26%), engineers (27%), architects (33 %), lawyers (30%), and university professors (42%). This is also true at the senior level administration of universities, government agencies, and management of private sector companies.

On 26th September, 1933, Lorrin A. Shepard M.D. Director of the American Hospital of Istanbul wrote to R..A. Lambert at the Rockefeller Foundation European Office

Ever since the republican revolution in Turkey progressive leaders of Turkish thought have become increasingly conscious that the University and the Medical School were behind times and inadequate. There has been a great deal of spoken and written criticism by Turks of the University and Medical School. During the past year this culminated in a thorough investigation by the Turkish Government carried out by Professor [Albert] Malche of Switzerland. [Formerly Director of Education of the Canton of Geneva.] The Government is now putting into effect Professor Malche’s recommendations. [Among these was the need to develop a modern university center of first quality] In order to have an effective reorganization however it was necessary to abolish the old University because according to law all the professors held office for life. With the abolition of the University the old Arabic name “Dar'ülfünun” has also been abolished. (Emphasis added) Courtesy Rockefeller [Foundation] Archives Center. Collection RF; Record Group 1.1; Series 717; Box 1; Folder 1.

This article is based on Arnold Reisman and Ismail Capar “GERMAN SPEAKING DIASPORA IN TURKEY: EXILES FROM NAZISM as ARCHITECTS OF MODERN TURKISH EDUCATION (1933-1945)” Diaspora, Indigenous, and Minority Education: An International Journal. 1(3) (2007) pgs 175-198