where T is the return ratio with the input source disabled (equal to the negative of the loop gain in the case of a single-loop system composed of unilateral blocks), G∞ is the asymptotic gain and G0 is the direct transmission term. This form for the gain can provide intuitive insight into the circuit and often is easier to derive than a direct attack on the gain.

As follows directly from limiting cases of the gain expression, the asymptotic gain G∞ is simply the gain of the system when the return ratio approaches infinity:

while the direct transmission term G0 is the gain of the system when the return ratio is zero:

Direct application of the model involves these steps:

These steps can be implemented directly in SPICE using the small-signal circuit of hand analysis. In this approach the dependent sources of the devices are readily accessed. In contrast, for experimental measurements using real devices or SPICE simulations using numerically generated device models with inaccessible dependent sources, evaluating the return ratio requires special methods.

while in classical feedback theory, in terms of the open loop gain A, the gain with feedback (closed loop gain) is:

Comparison of the two expressions indicates the feedback factor βFB is:

while the open-loop gain is:

If the accuracy is adequate (usually it is), these formulas suggest an alternative evaluation of T: evaluate the open-loop gain and G∞ and use these expressions to find T. Often these two evaluations are easier than evaluation of T directly. 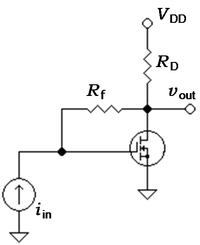 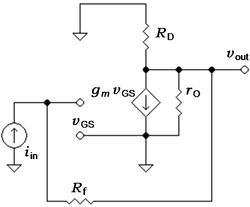 Consider the simple MOSFET feedback amplifier at right. The aim is to find the low-frequency, open-circuit, transresistance gain of this circuit G = vout / i in using the asymptotic gain model. 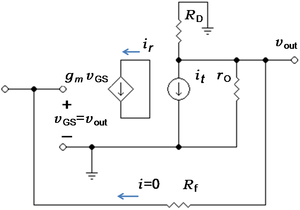 It is most straightforward to begin by finding the return ratio T, because G0 and G∞ are defined as limiting forms of the gain as T tends to either zero or infinity. To take these limits, it is necessary to know what parameters T depends upon. There is only one dependent source in this circuit, so as a starting point the return ratio related to this source is determined as outlined in the article on return ratio.

where the approximation is accurate in the common case where rO >> RD. With this relationship it is clear that the limits T → 0, or ∞ are realized if we let transconductance gm → 0, or ∞.[5]

Finding the asymptotic gain G∞ provides insight, and usually can be done by inspection. To find G∞ we let gm → ∞ and find the resulting gain. The drain current, iD = gm vGS, must be finite. Hence, as gm approaches infinity, vGS also must approach zero. As the source is grounded, vGS = 0 implies vG = 0 as well.[6] With vG = 0 and the fact that all the input current flows through Rf (as the FET has an infinite input impedance), the output voltage is simply −iin Rf. Hence

Alternatively G∞ is the gain found by replacing the transistor by an ideal amplifier with infinite gain - a nullor.[7]

To find the direct feedthrough G0 we simply let gm → 0 and compute the resulting gain. The currents through Rf and the parallel combination of RD || rO must therefore be the same and equal to iin. The output voltage is therefore iin (RD || rO).

where the approximation is accurate in the common case where rO >> RD.

The overall transresistance gain of this amplifier is therefore:

Examining this equation, it appears to be advantageous to make RD large in order make the overall gain approach the asymptotic gain, which makes the gain insensitive to amplifier parameters (gm and RD). In addition, a large first term reduces the importance of the direct feedthrough factor, which degrades the amplifier. One way to increase RD is to replace this resistor by an active load, for example, a current mirror.

(PD) Image: John R. Brews
Two-transistor feedback amplifier; any source impedance RS is lumped in with the base resistor RB. 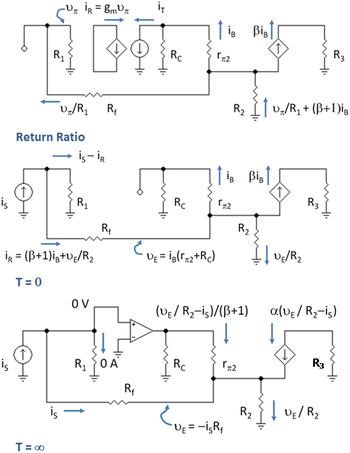 A figure at left shows a two-transistor amplifier with a feedback resistor Rf. This amplifier is often referred to as a shunt-series feedback amplifier, and analyzed on the basis that resistor R2 is in series with the output and samples output current, while Rf is in shunt (parallel) with the input and subtracts from the input current. See the article on negative feedback amplifier and references by Meyer or Sedra.[8][9] That is, the amplifier uses current feedback. It frequently is ambiguous just what type of feedback is involved in an amplifier, and the asymptotic gain approach has the advantage/disadvantage that it works whether or not you understand the circuit.

To implement the asymptotic gain model, the dependent source associated with either transistor can be used. Here the first transistor is chosen.

The circuit to determine the return ratio is shown in the top panel of the arrangement of three small-signal circuits. Labels show the currents in the various branches as found using a combination of Ohm's law and Kirchhoff's laws. Resistor R1 = RB // rπ1 and R3 = RC2 // RL. KVL from the ground of R1 to the ground of R2 provides:

KVL provides the collector voltage at the top of RC as

Finally, KCL at this collector provides

Substituting the first equation into the second and the second into the third, the return ratio is found as

Using Ohm's law, the voltage at the top of R1 is found as

Using KCL at the top of R2:

Emitter voltage vE already is known in terms of iB from the diagram in the center panel. Substituting the second equation in the first, iB is determined in terms of iS alone, and G0 becomes:

Gain G0 represents feedforward through the feedback network, and commonly is negligible.

The circuit to determine G∞ is shown in the bottom panel of the small-signal circuits. The introduction of the ideal op amp (a nullor) in this circuit is explained as follows. When T → ∞, the gain of the amplifier goes to infinity as well, and in such a case the differential voltage driving the amplifier (the voltage across the input transistor rπ1) is driven to zero and (according to Ohm's law when there is no voltage) it draws no input current. On the other hand the output current and output voltage are whatever the circuit demands. This behavior is like a nullor, so a nullor can be introduced to represent the infinite gain transistor.

The current gain is read directly off the schematic:

Using the classical model, the feed-forward is neglected and the feedback factor βFB is (assuming transistor β >> 1):

and the open-loop gain A is:

The above expressions can be substituted into the asymptotic gain model equation to find the overall gain G. The resulting gain is the current gain of the amplifier with a short-circuit load.

In the figure showing the amplifier with transistors, RL and RC2 are in parallel. To obtain the transresistance gain, say Aρ, that is, the gain using voltage as output variable, the short-circuit current gain G is multiplied by RC2||RL in accordance with Ohm's law:

The open-circuit voltage gain is found from Aρ by setting RL → ∞.

To obtain the current gain when load current iL in load resistor RL is the output variable, say Ai, the formula for current division is used: iL = iout × RC2 / ( RC2 + RL ) and the short-circuit current gain G is multiplied by this loading factor:

Of course, the short-circuit current gain is recovered by setting RL = 0 Ω.