Arthur J. Altmeyer (1891-1972) was a key figure in the design and implementation of the U.S. Social Security system.

Altmeyer was born in Wisconsin and developed an early interest in social security while working as an office boy in his uncle's law office.[1] For a while he was a public school teacher and school principal and also attended the University of Wisconsin-Madison where he studied with John R. Commons, one of a handful of American economists versed in social insurance who was actively interested in workers' compensation, unemployment insurance and health insurance. In 1918, Altmeyer became Commons' graduate research assistant. Together they co-authored a report on "The Health Insurance Movement in the United States" for the Illinois Health Insurance Commission and the Ohio Health and Old Age Insurance Commission.[2] In 1931, Altmeyer earned a Ph.D. in economics from the University of Wisconsin.

Altmeyer became Chief Statistician of the Wisconsin Industrial Commission in 1920 working under Edwin E. Witte. Altmeyer founded a monthly publication, the Wisconsin Labor Market, which was second such publications in the U.S. In 1922, after Witte had moved on, Altmeyer was appointed to his position as Secretary of the Wisconsin Industrial Commission, a position he held, with one interim, until 1932. In this position Altmeyer oversaw Wisconsin's worker's compensation program and developed and implemented the state's unemployment insurance system which was the first of its kind in the U.S. In 1927, he went on leave to assume a temporary federal position in the Great Lakes Region with responsibility for implementing the Longshoremen's and Harbor Workers' Compensation Act.[3]

In Spring, 1933, he was invited to Washington by Labor Secretary Frances Perkins to consult on relations with state labor departments. He advised the Federal Emergency Relief Administration and the Civil Works Administration. In November 1933, he was appointed Director of the Labor Compliance Division of the National Recovery Administration. He returned briefly to Madison in May 1934 but was almost immediately appointed Second Assistant Secretary of Labor.[4]

In June, 1934, Altmeyer, acting upon instructions from President Franklin Delano Roosevelt, Secretary Perkins and Presidential Adviser Harry Hopkins, drafted for the president Executive Order 6757, which provided for creation of a Committee on Economic Security, the committee which oversaw drafting of the bill which became the Social Security Act of 1935. Perkins chaired the committee, and Altmeyer served as technical director. Other figures on the board included Hopkins, Secretary of the Treasury Henry Morgenthau Jr., Attorney General Homer Cummings, and Secretary of Agriculture Henry A. Wallace. The Committee selected as its Executive Director Edwin E. Witte of the Economics Department at the University of Wisconsin and an expert in labor legislation.[5] 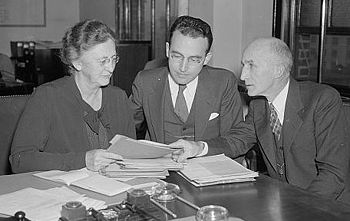 Altmeyer was the principal advocate for changes to the Social Security Act in 1939. He advocated for broadening the program from a personal retirement program to a family social insurance program, one that protected family dependents in the cases of death or disability and to care for families with dependent children.

Altmeyer continued to advocated for expansion of Social Security benefits. In 1950 and 1952, he was able to persuade Congress to include workers not included under the original act. He also fought against Congress's inclination to make the Social Security Administration a place for patronage. These struggles against Congress ultimately led to his termination as Social Security Commissioner in 1953 when his re-appointment was not confirmed by a new Republican-controlled Congress.

Outside of Social Security, he was involved in implementation of a federal and state civil service merit system and for a policy making federal grants proportional to per capita state income.[6] During World War Two, Altmeyer was the secretary of the War Manpower Commission. Following the war he served as secretary to the International Refugee Organization. As the leading authority on the U.S. social security system, he was also consulted by Latin American nations during the 1940s and 1950s when those nations began developing social security programs of their own.

Through Altmeyer's leadership of the Social Security Board and Social Security Administration, he turned it into one of the best actuarial research offices of the U.S. government. He had a profound intellectual grasp of social policy issues as well as the administrative skills to turn policy into operation.[7]

Following his death in 1972, the Social Security Administration renamed in his honor its Washington, D.C., headquarters.